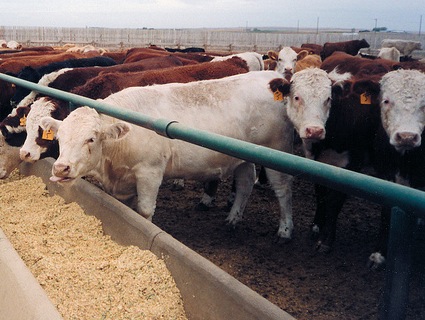 There’s been so much food news this week that I didn’t know where to begin. So I decided to try to do as many as possible, digest style.

China’s Appetite for US Pork May Extend to Beef

The takeover of US pork giant Smithfield by Chinese meat behemoth Shuanghui International is the latest data point in a long-term trend: The US, with its hyper-consolidated meat production system, is emerging as a CAFO to the world.

Meanwhile, Reuters reports that beef could be next. The nation doesn’t consume much beef per capita—pork and chicken are much more common—but its popularity is surging. The nation’s beef imports are soaring, too, but remain a tiny fraction of its overall consumption. The country doesn’t accept US meat—at least legally—but that could soon change:

The United States, the world’s fourth-largest beef exporter, hopes a recent downgrade of its mad cow disease risk status by the UN World Organization for Animal Health will boost its chances of gaining a foothold in the growing Chinese market. Significant quantities of U.S. beef are already smuggled into China through Hong Kong, and the industry is pushing for new talks on formal approval when U.S. President Barack Obama meets President Xi Jinping in California later this week. “If China opens its market to U.S. and Indian beef, the growth rate (in imports) will exceed double-digits,” said Rabobank analyst Pan Chenjun.

The Reuters piece sheds light on one reason China is suddenly so interested in meat imports: “spreading urban sprawl that is rapidly swallowing up agricultural land and pushing up farmers’ costs.”

Cargill and McDonalds Team Up for Russian McNuggets

The US meat industry isn’t just gearing up to export loads of factory-farmed meat. It’s also setting up shop in foreign markets, replicating its model right down to the McNuggets. More from WattAgNet:

Cargill officially opened a chicken processing facility at its complex in Efremov, Russia. This $40 million facility, Cargill’s first primary chicken processing operation in Russia, will predominantly supply McDonald’s restaurants in Russia with Chicken McNuggets as well as other chicken products.

As I’ve written before, diet soda may not be the health-neutral elixir it seems at first glance. Recent headlines about artificially sweetened drinks being as bad for your teeth as a meth addiction seem overblown, but links to type-2 diabetes recently got stronger. In a paper (abstract) published in the European Journal of Nutrition, Japanese researchers tracked a group of around 2000 factory workers over seven years and found that regular diet soda drinkers have significantly higher rates of type 2 diabetes than non-drinkers. Meanwhile, Washington University, St. Louis, researchers have published a paper on the effects of sucralose, a popular no-calorie sweetener marketed as Splenda, on the insulin response of 17 obese patients who don’t normally consume diet drinks. The results, from a University of Washington press release quoting one of the researchers:

When study participants drank sucralose, their blood sugar peaked at a higher level than when they drank only water before consuming glucose Insulin levels also rose about 20 percent higher. So the artificial sweetener was related to an enhanced blood insulin and glucose response.

Huffington Post has a good summary of recent research on diet soda and health.

My own vice for getting through the day is coffee. I’m not sure what I’d do if it, too, were the subject of a steady stream of bad health reports. Happily, most of the research around coffee finds positive effects—perhaps not surprising given that people have been enjoying it for hundreds of years (whereas artificially sweetened drinks have been widely used for little more than a generation). The New York Times’ Gretchen Reynolds reports that a spate of recent studies suggest that “moderate” coffee consumption—”the equivalent of three or four 5-ounce cups of coffee a day or a single venti-size Starbucks”—delivers a range of benefits, including a “reduction in the risk of developing Type 2 diabetes, basal cell carcinoma (the most common skin cancer), prostate cancer, oral cancer and breast cancer recurrence.” And then there are the brain benefits of caffeine:

In a 2012 experiment at the University of Illinois at Urbana-Champaign, mice were briefly starved of oxygen, causing them to lose the ability to form memories. Half of the mice received a dose of caffeine that was the equivalent of several cups of coffee. After they were reoxygenated, the caffeinated mice regained their ability to form new memories 33 percent faster than the uncaffeinated. Close examination of the animals’ brain tissue showed that the caffeine disrupted the action of adenosine, a substance inside cells that usually provides energy, but can become destructive if it leaks out when the cells are injured or under stress. The escaped adenosine can jump-start a biochemical cascade leading to inflammation, which can disrupt the function of neurons, and potentially contribute to neurodegeneration or, in other words, dementia.

Other research, Reynolds reports, has found that coffee has more of an anti-dementia effect than isolated caffeine: She points to a 2011 study by University of South Florida researchers finding that “mice genetically bred to develop Alzheimer’s and then given caffeine alone did not fare as well on memory tests as those provided with actual coffee.”

Should Wine Ingredients Be Listed on Labels?

Forget about the often poisonous chemicals used in the vineyards, which can leave residue on the grapes. In the winery alone, before fermentation even begins, enzymes may be added to speed up the removal of solid particles from the juice, to amplify desirable aromas while eliminating disagreeable ones, to intensify the color of red wines and to clarify the color of whites.

It doesn’t stop there. Other additives can be used to enhance a wine’s texture, to add or subtract tannins or simply to adjust quality. Winemakers can select specific yeasts and special nutrients to keep those yeasts working. They can add oak extracts for flavor and further tannin adjustment, and compounds derived from grape juice to fix color, texture and body. They can add sugar to lengthen the fermentation, increasing the alcohol content; add acid if it’s lacking; add water if the alcohol level is too high. Or they can send the wine through a reverse-osmosis machine or other heavy equipment to diminish the alcohol and eliminate other undesirable traits, like volatile acidity.

As a result of all this manipulation, Asimov writes, wine often turns out to be a “manufactured product, processed to achieve a preconceived notion of how it should feel, smell and taste, and then rolled off the assembly line, year after year, as consistent and denatured as a potato chip or fast-food burger.”

Designer yeasts have emerged as the engines of flavor in many wines, shunting grapes to the background.

Asimov doesn’t get into it in this piece, but designer yeasts have emerged as the engines of flavor in many wines, shunting grapes to the background. A 2008 article from a wine-industry trade magazine tells the story. It focuses on Linda Bisson, a professor of enology at UC Davis, an enormously influential institution in the California wine trade. The article describes Bisson as a “renowned yeast geneticist.” Here is her message to winemakers: “You can tailor your product to reach your customer by identifying consumer preferences, the effect that a choice has on a customer, and its genetic composition.”

And how can winemakers achieve this customization? It’s easy: “Once we’ve identified the flavor compounds, we can manipulate the taste. We derive flavors from the yeast, not the grapes.” And here’s a little-known fact: US winemakers may be using genetically modified yeasts.

Asimov laments that “unlike processed foods, wine is not required to have its ingredients listed on the label.” As a result, only a few US winemakers—Bonny Doon Vineyard, Shinn Estate Vineyards and Ridge Vineyards—let you know on the bottle what you’re getting along with the grape juice.