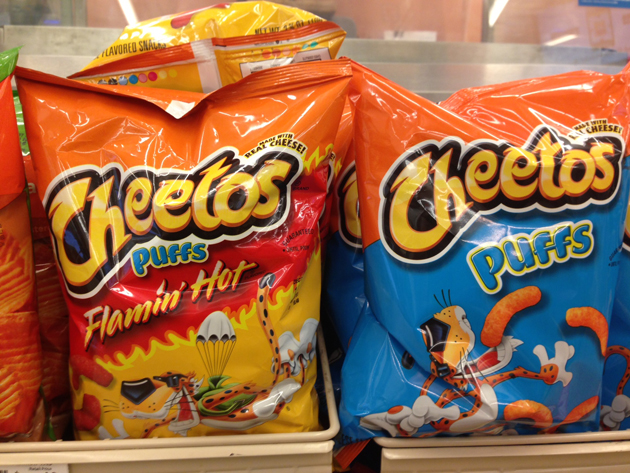 In 2011, Walmart pledged to offer healthier grocery options by reducing the sugar and sodium content of packaged foods, rolling out a “Great for You” food label, and making fresh fruits and vegetables more affordable. It has done that to an extent, but those are not typically the products that it markets to its “low income” shoppers.

A November 13 advertising circular specifically aimed at low-income customers included discount coupons for a two-liter bottle of Coca-Cola, a 10-pack of Kool-Aid Jammers drinks, and a 9.5-ounce bag of Cheetos. Only 3 of the 36 discounted items in the ad were labeled “Great for You,” while 10 of them touted high-sugar, high-sodium, or high-fat junk foods. The ad did not include any coupons for fresh fruits or vegetables. 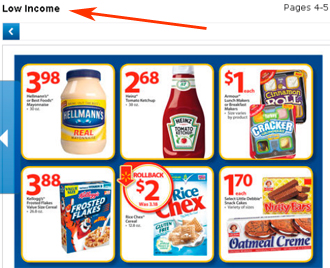 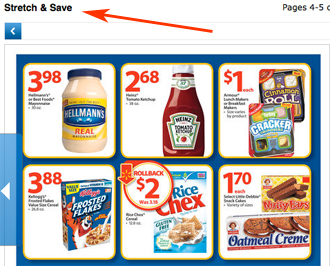 Early this year, Michele Obama appeared at a Walmart store in Springfield, Missouri, to tout the retail giant’s move toward healthier offerings. “For years, the conventional wisdom said that healthy products just didn’t sell,” she said from a podium set up in the produce section. “Thanks to Walmart and other companies, we are proving the conventional wisdom wrong.”

But Walmart’s advertising strategy seems to suggest that the retail giant still isn’t willing to market fresh fruits and vegetables to the shopping demographic that most needs them. It’s hard to say why. Maybe Walmart has figured out that ads for Bartlett pears won’t get the poor through the doors. Or maybe its mediocre and low-margin produce just isn’t profitable enough.

Either way, one would hope Walmart, as a corporate citizen, could see value in marketing healthy foods to low-income shoppers, given that those shoppers are also its workers. Then again, controlling its employees’ health care costs typically hasn’t been a big part of Walmart’s business plan.