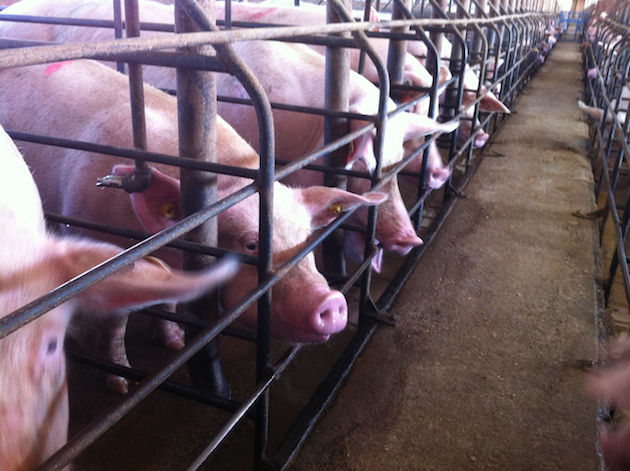 Boxed in: Pregant sows in gestation crates at a hog facility in Oklahoma. Mercy For Animals

Pushed by consumer outrage, the pork industry appears to be slowly moving away from the practice of confining pregnant sows for most of their lives in “gestation crates”: spaces so tight, the unfortunate beasts can’t even turn around. (“Basically, you’re asking a sow to live in an airline seat,” as the animal-welfare expert Temple Grandin puts it.) Several large retailers and food chains, including McDonald’s, Burger King, Wendy’s, Chipotle, Safeway, Kroger, Costco, and Kmart, have pledged to demand that the pork they buy be from crate-free facilities; and several gigantic pork processors, including Smithfield and Hormel, have vowed to comply.

But two massive companies—Walmart, which is by far the nation’s largest grocer, and mega-meat processor Tyson—have stubbornly refused to take a stand on crates, shrugging off considerable pressure. I think that may be about to change.

That’s because undercover investigators from the animal-welfare Mercy For Animals managed to infiltrate the workforce of an Oklahoma facility that supplies hogs to Tyson, which in turn processes them into pork for Walmart. What they found looks like a public-service commercial on the cruelty of gestation crates—with a nasty dash of baby-pig abuse thrown in. The video documents abuse both routine and spectacular: from the awful confinement of pregnant sows into tiny spaces to men pummeling them with sheets of wood and kicking them. The video isn’t for the squeamish.

Just a few weeks ago, Mercy For Animals got the goods on another facility that supplies pork to Walmart, this one in Minnesota. This particular plant isn’t affiliated with Tyson—but embarrassingly, its owner, Randy Spronk, is president of an industry trade group called the National Pork Producers Council. When you watch the following video, reflect that Spronk’s company defends the practices depicted on the grounds that they’re standard within the industry, including the bludgeoning to death of sick baby pigs.

Why do I think these latest exposés will sour Tyson and Walmart on sow crates? Recall that pork giant Smithfield was wavering on its commitment to phase out the practice—until a 2010 undercover investigation by the Humane Society of the United States documented horrific sow-crate scenes on it own farms. Like a hard slap in the face, the revelations inspired the company to vow anew to phase out extreme confinement of pregnant pigs.

Tyson has responded to the Oklahoma case by cutting ties to the hog operation in question, The Los Angeles Times reports. “We’re serious about proper animal handling and expect the farmers who supply us to treat animals with care and to be trained and certified in responsible animal care practices,” the company wrote in a statement. As for Walmart, “We think the animal handling in this video [the Oklahoma one] is unacceptable. We agree with Tyson’s decision to terminate the relationship with the farm,” a spokesperson told me.

But taking action against a single supplier might not be enough. There are really two issues here. One is overt violence—the kicking and pummeling. The other is the inherent cruelty of the crates themselves. On the latter issue, the Walmart spokesperson said, “We are currently engaged with pork suppliers, food manufacturers, animal rights organizations, and others to work towards an industry-wide model for raising pork that is not only respectful of farmers and animals, but also meets our customers’ expectations for quality and animal safety.”

Uh huh. It turns out, I think, that systematic abuse of the creatures that feed us can only flourish when it can be hidden from the public. As Ted Genoways showed in the cover story of the July/August 2013 Mother Jones, that’s exactly why the meat industry has fought so hard to criminalize the investigations of groups like the Humane Society and Mercy for Animals. But at this point, the cat is out of the bag—and soon, I reckon, the sow will be out of the crate.