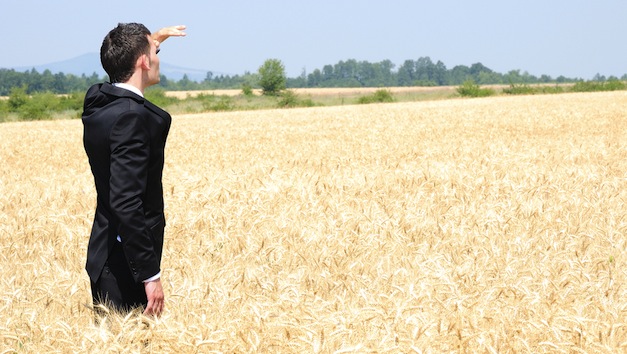 In a couple of posts last fall (here and here), I showed that corporations don’t do much actual farming in the United States. True, agrichemical companies like Monsanto and Syngenta mint fortunes by selling seeds and chemicals to farmers, and grain processors like Archer Daniels Midland and Cargill reap billions from buying crops cheap and turning them into pricey stuff like livestock feed, sweetener, cooking oil, and ethanol. But the great bulk of US farms—enterprises that generally have razor-thin profit margins—are run by independent operators.

That may be on the verge of changing. A recent report by the Oakland Institute documents a fledgling, little-studied trend: Corporations are starting to buy up US farmland, especially in areas dominated by industrial-scale agriculture, like Iowa and California’s Central Valley. But the land-grabbing companies aren’t agribusinesses like Monsanto and Cargill. Instead, they’re financial firms: investment arms of insurance companies, banks, pension funds, and the like. In short, Wall Street spies gold in those fields of greens and grains.

Why are they plowing cash into such an inherently risky business with such seemingly low profit potential? For Wall Street, farmland represents a “reassuringly tangible commodity” with the potential for “solid, if not excellent, returns,” the Oakland Institute notes—something clients are hungry for after being recently burned not long ago by credit-default swaps and securities backed by trashy mortgages. As the saying goes, you can’t make more land; and as the Oakland Institute notes, “over the last 50 years, the amount of global arable land per capita shrank by roughly 45 percent, and it is expected to continue declining, albeit more moderately, going toward 2050.”

Nearly 40 percent of US farmland is rented—and more like 50 percent in ag-heavy regions.

Financial institutions and food-strapped countries like China and United Arab Emirates have already been snapping up land in the developing world, where prices are low and labor is cheap. But now, the Oakland Institute reports, pricey US land is also looking attractive, because it “boasts some of the world’s most fertile soil, advanced industrial farm technology, strong private property rights, [and] federally subsidized crop insurance.”

And Wall Street likes a good bubble. Farmland prices have soared to all-time highs in recent years, pushed up by the government-mandated corn ethanol boom. The average per acre price of Iowa land surged about 60 percent in real terms between 2007 and 2012, and rents have jumped in lockstep.

The report notes that over the next 20 years, nearly half of US farmland—about 400 million acres—will be up for sale as our aging base of farmers moves into retirement. So far, Wall Street cash is moving onto US farms like a stream; financial firms own just about 1 percent of total acreage, and most farmland is still bought by farmers, not institutional investors, the report states. But as more prime land enters the market, the hot money could soon flow like a gusher. By mid-2013, farmland was such a hot commodity that institutional investors were complaining of a tight market for prime farmland—that is, they had more money committed to buying farmland than they could find attractive deals for. But the supply of prime farmland for sale will expand as farmers retire in the coming decades, and Wall Street looks poised to move into the market.

And of course, you don’t have to take on the risk of farming when you buy farmland; you can also collect rent checks from the people who take on that risk. According to this USDA report, nearly 40 percent of US farmland acres are rented, and in the ag-heavy regions of farm states such as Iowa, Illinois, and California, the number tops 50 percent. The Oakland Institute report points out that one of the biggest players eyeing US farms is UBS Agrinvest, an arm of the Swiss banking mammoth UBS. UBS’s strategy: “Rather than gambling its profits on commodity prices that could rise or fall, Agrivest prefers the predictable income that comes from renting to tenants, usually through lease agreements that last one to five years.” That strategy is looking pretty good right now, because corn and soy prices have fallen while land rents remain stubbornly high. Between 2010 and 2012, the value of UBS’s US farmland portfolio jumped from $192 million to $415 million.

Another major player, particularly in California, is the Hancock Agricultural Investment Group, which is investing heavily in land suitable for growing export crops for East Asia’s rising middle classes, like nuts and wine grapes. Hancock Agricultural Investment Group owns 290,000 acres of US farmland—nearly 40 percent of which is devoted to almonds, pistachios, walnuts, and macadamia nuts, all of which have found a booming export market in Asia in recent years (wine grapes, also a hot export product, make up another 8 percent of its holdings). According to its Investment Strategy, HAIG leases the land it owns that is devoted to “row” crops like vegetables and corn. But for “permanent” crops like tree nuts—with the help of Farmland Management Services, a national farmland management firm with primary offices in Turlock, California, and Champaign, Illinois—HAIG tends to “directly operate” the land in order to “maximize income returns.” Translation: It figures that the large profit potential associated with hot export products offsets the inherent risks of farming.

Overuse of water in California’s Central Valley has caused a landmass twice the size of Los Angeles to sink 11 inches per year.

Of course, one advantage of owning farmland in California’s is its Wild West water-pumping regulations. California’s Central Valley, now parched by its worst drought in 500 years, is the site of much of that booming nut production. Almonds and pistachios are thirsty crops, as my colleagues Alex Park and Julia Lurie recently showed, yet acreage devoted to almonds rose by more than 25 percent between 2006 and 2013, while pistachio acres jumped 50 percent over a similar time frame.

For about a decade, Central Valley farmers there have been pumping groundwater much faster than it can naturally be replenished, to make up for reduced irrigation flows from the state’s rivers and streams, researchers at the University of California Center for Hydrologic Modeling recently found. The trend has dramatically increased since the current drought’s onset in 2011, the team says. The overpumping has gotten so bad that 1,200 square mile swath of the Central Valley—a landmass more than twice as large as Los Angeles—has been sinking by an average of 11 inches per year, a 2013 US Geological Survey study found. And here’s the kicker: USGS hydrologist Michelle Sneed, told me that the switch from row crops like broccoli to tree crops like nuts have worsened the situation, because crop growers can fallow fields during a drought, while nut growers have to keep their trees watered or risk losing them altogether. The pumping frenzy is made possible by a regulatory free-for-all—Peter Gleick, president of the Pacific Institute, a leading think thank on water issues, says California has no statewide limits on how landowners can exploit the water under their land—a state of affairs he calls a “recipe for disaster.”

Wall Street’s move onto farms comes at a time of severe ecological flux that will be exacerbated by climate change. On top of deepening water woes in California—where half of US-grown fresh produce comes from—there’s a slow-motion, largely invisible soil crisis brewing in the Midwestern grain belt, which I wrote about here. Who would you trust more to navigate these challenges sustainably—farmers looking to pass on productive land to their kids, or financial managers operating under pressure to deliver short-term profits to investors?