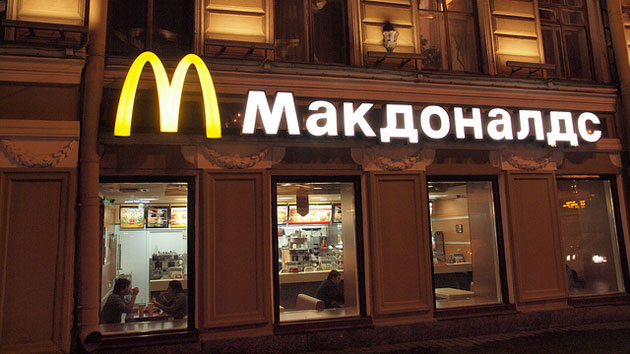 Russia’s health inspection agency is scrutinizing more than 100 McDonald’s locations and has forced the company to temporarily close multiple others in the country. The agency says McDonalds outlets are getting inspected because some have violated sanitary regulations— but others see retaliation for US sanctions on Russia.

“This is a prominent symbol of the U.S. It has a lot of restaurants and therefore is a meaningful target,” Yulia Bushueva, managing director for Arbat Capital, an investment advisory company, told Bloomberg. “I don’t recall McDonald’s having consumer-safety problems of such a scale in over more than two decades of presence in Russia.”

McDonald’s was the first fast food chain to enter Russia, and it holds some symbolic importance in the country. The first location opened in Pushkin Square in Moscow in January 1990 to one utterly massive line (see video below). This was shortly after the fall of the Berlin Wall but nearly two years before the dissolution of the Soviet Union when Western brands of any stripe were a rare sight in Russia. At the time, the site of the Golden Arches in the center of Moscow signaled the arrival of a new era of prosperity and integration with the world economy.

Today, there are more than 400 McDonald’s outlets in the country. Many are owned locally. The company employs more than 37,000 people in Russia and sources 85 percent of its products from Russian suppliers, according to its website.

But as Russia and the West began facing off over Ukraine this spring, McDonald’s has fallen victim to their power struggle. In April, McDonald’s announced it would close it’s three company-owned locations in Crimea “due to operational reasons beyond our control,” according to their statement to Reuters.

That decision was praised by Vladimir Zhirinovsky, a prominent legislator and Putin supporter, who suggested the chain should leave Russia as well. “It would be good if they closed here too, if they disappeared for good,” he said in Russian media. “Pepsi-Cola would be next.” Zhirinovsky also proposed instructing members of his Liberal Democratic party to picket outside McDonald’s until they closed.

Since August 20, McDonald’s has temporarily closed 12 locations throughout Russia, including four in Krasnodar, near the black sea, and the iconic first-ever location in Moscow. Burger King, Subway, and KFC— which have all seen big expansions in Russia in recent years— have remained unscathed.