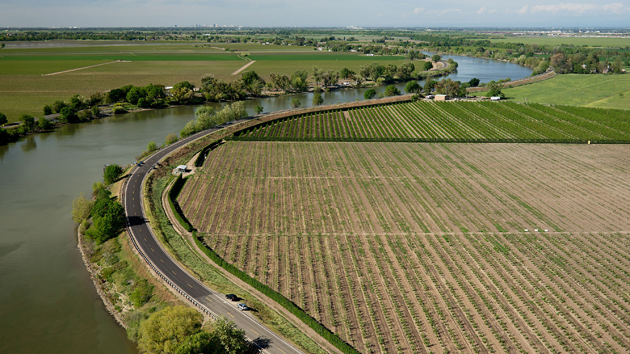 California’s Water Resources Control Board proposed a $1.5 million fine today for a farming district’s unauthorized use of water—the first such fine in the state’s four-year drought. The Board alleged that the Byron-Bethany Irrigation District, a region serving 160 farmers just east of San Francisco, illegally diverted nearly 700 million gallons of water over the course of two weeks in June.

Byron-Bethany is one of about 5,000 water-rights holders notified this year that there isn’t enough water to pump from lakes and rivers, and it’s illegal to divert water after receiving such notifications. In response, several water users, including Byron-Bethany, have sued the state for cutting off its water supply.

“We will vigorously defend our rights,” said Rick Gilmore, general manager of the district, to the San Jose Mercury News last month. “All our sweet corn and tomatoes—they won’t make it to harvest. Almonds and cherries will suffer damage,” he said. “They’ll lose the water they need for July and August.”

The proposed fine, which the district will likely contest in a coming hearing, is the first fine sought by the Board under a new structure in which water rights holders can be penalized for past unauthorized use of water, even if they have stopped diverting since. But Byron-Bethany probably isn’t alone; Andrew Tauriainen, a lawyer for the state’s Division of Water Rights, says, “It’s highly likely that additional enforcement actions will follow in weeks and months ahead.”