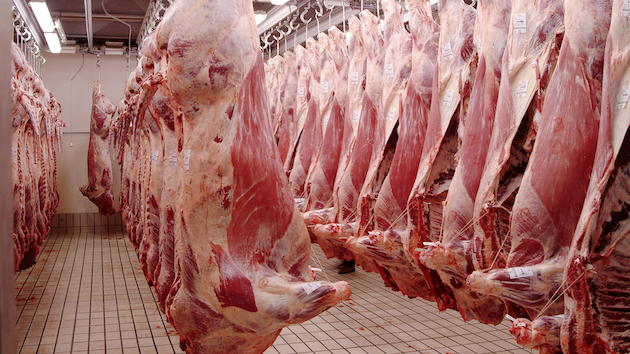 The US meat industry scored a big victory this week when world leaders hammered out an agreement that would reduce trade barriers across the Pacific: from the United Sates, Canada, Mexico, Peru, and Chile on this side to Australia, New Zealand, Japan, Malaysia, Brunei, Vietnam, and Singapore on the other.

President Barack Obama has made passing the Trans-Pacific Partnership, or the TPP, the signature goal of his second term. Now it goes to Capitol Hill for approval—which it will likely get, given that back in June, Congress granted the president “fast track” authority to negotiate trade deals, meaning that it will be considered in up-down, simple-majority votes in both chambers, with no chance of amendment or filibuster.

So how would the TPP affect Big Meat in the United States? The industry is currently facing stagnant domestic demand for its product as Americans eat less meat. The TPP would open markets in countries that currently protect domestic farmers with tariffs. Japan, for example, agreed to slash its tariff on imported beef from 38 percent to 9 percent over the next 15 years—likely making it much easier for American importers to gain a foothold. Because the pact has been negotiated in secret and few details about it have been released, it’s impossible to estimate how big of a boost the TPP will provide to US meat purveyors. But it already has industry groups doing the money dance.

In a press release celebrating the TPP, the National Pork Producers Council declared that the trade pact “could increase US pork exports over time exponentially.” The National Chicken Council, meanwhile, crowed that the TPP “represents a significant opportunity to expand US chicken exports and bring increased economic benefits to chicken farmers and companies across the country.” The United States Cattleman’s Association, facing severely declining US beef demand, hailed it in an emailed statement as “welcome news to a domestic industry in need of expanding international market access and reduction of tariffs in the countries included.”

Of course, when asked why they’re eating less meat, Americans commonly cite a desire to reduce the environmental and social impacts of industrial-scale meat production: everything from animal cruelty to fouled water and air to labor abuses at slaughterhouses and pillaged local economies. An export boom will only intensify those trends.

“We are already seeing the industry posturing in anticipation for the TPP to pass,” Kendra Kimbirauskas, an Oregon farmer and CEO of the Socially Responsible Agricultural Project. In Oregon, she adds, “representatives for the industry have spoken about wanting to triple dairy production in the Pacific Northwest to meet Asian demand for powdered milk.”

She points to another concern with the deal: the infamous Investor-State Dispute Settlement clause, which would allow corporations within the TPP zone to challenge regulations imposed by member governments in a binding international court. For instance, a company could protest against health and safety regulations if it felt they restricted its business. (Here’s a blistering critique of the ISDS clause from Sen. Elizabeth Warren.) Two foreign companies—Brazil’s JBS and China’s Shuanghui—now control nearly half of US pork production. Neither Brazil nor China is in the TPP, but nothing’s stopping either from opening a subsidiary in, say, Australia or Japan, and then filing an Investor-State Dispute Settlement suit to stifle some state regulation on factory-scale livestock farming, says Karen Hansen-Kuhn, director of international strategies for the Institute for Agriculture and Trade Policy.

“The few tools that impacted communities have remaining to protect themselves from CAFO [concentrated animal feeding operations] pollution could be in jeopardy if those regulations are seen as a barrier to trade with the potential to impact corporate profits,” Kimbirauskas adds.

Hansen-Kuhn also notes that the US trade representative’s summary of the TPP contains this line: The “TPP Parties have also agreed to increased transparency and cooperation on certain activities related to agricultural biotechnology”—another way of saying genetically modified organisms, or GMOs. That’s vague language, and the TPP’s full criteria for GMOs has not been spelled out. But it certainly appears to place pressure on TPP countries that have opted not to use them, like Japan and Peru.