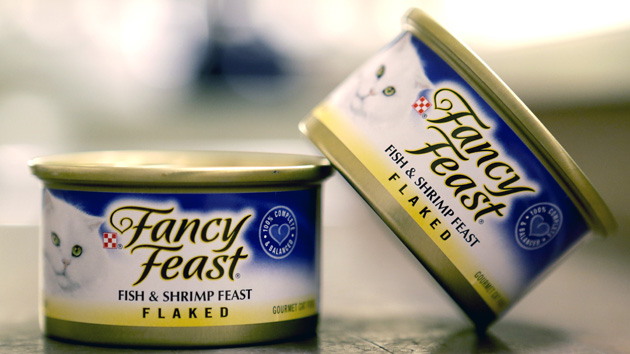 Nestlé's Fancy Feast cat food, with a "fish and shrimp feast" flavor, is a product of Thailand. John Raoux/AP

If you’ve ever purchased seafood or pet food from Nestlé, you may have unwittingly contributed to the abuse of migrant workers in Southeast Asia.

Burmese and Cambodian workers are tricked into laboring on Thai fishing boats after fleeing persecution and poverty at home.

On Monday, Nestlé admitted that it had found indications of forced labor, human trafficking, and child labor in its supply chain in Thailand, where the Switzerland-based company sources some of the seafood that it sells in supermarkets around the world, including in the United States. The findings came after an internal investigation that was launched by Nestlé in December last year, following reports by media and NGOs that linked the company’s shrimp, prawns, and Purina brand pet foods with abusive working conditions.

Many of the workers in question are migrants from Thailand’s less developed neighbors, Burma and Cambodia, who are tricked into laboring on fishing boats after fleeing persecution and poverty at home, according to the Massachusetts-based nonprofit Verité, which at Nestlé’s request interviewed workers at six of the company’s production sites in Thailand. Workers “had been subjected to deceptive recruitment practices that started in their home countries, transported to Thailand under inhumane conditions, charged with excessive fees leading to debt bondage in some cases, exposed to exploitative and hazardous working conditions, and, at the time of assessment, were living under sub-par to degrading conditions,” Verité wrote in its report.

But Nestlé isn’t the only one with a tainted supply chain: The mistreatment of migrants is systematic in Thailand’s fishing sector, Verité found, meaning that other American and European companies that buy seafood from the country are likely complicit in similar labor abuses. These abuses have been highlighted by the US State Department, which last year downgraded Thailand to the lowest level in its annual report on human trafficking, and they underpin several lawsuits that have been filed recently against retailers including Nestlé and Costco Wholesale Corp. Steve Berman, managing partner of the law firm Hagens Berman, which in August filed a class-action lawsuit against Nestlé, told the New York Times that the company’s report on Monday was “a step in the right direction,” but added that “our litigation will go forward because Nestlé Purina still fails to disclose on its products, as is required by law, that slave labor was used in its making.”

For its part, Nestlé has vowed to publish a strategy to protect workers in Thailand, including by bringing in outside auditors and training boat owners about human rights. “This will be neither a quick nor an easy endeavour, but we look forward to making significant progress in the months ahead,” Magdi Batato, Nestlé’s executive vice president in charge of operations, said in a statement.