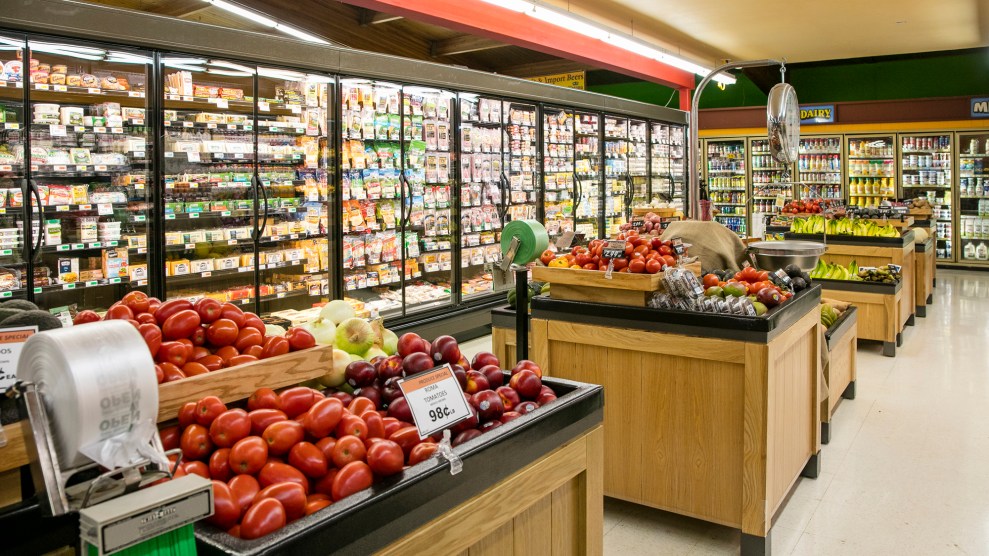 To journalist Michael Ruhlman, the supermarket is much more than just the place where you go to buy eggs and bread—it’s a window into our rapidly changing food culture. For instance: The “fresh” apples you see advertised at the front of the store may have been held in “vast warehouses filled with a mixture of oxygen and carbon dioxide” all winter. We caught up with Ruhlman, the author of the new book Grocery: The Buying and Selling of Food in America, on the latest episode of the Mother Jones food podcast, Bite. (The interview begins at 14:51.)

Ruhlman told us about what Amazon’s purchase of Whole Foods portends for the future of the grocery industry—and some of the surprising revelations he uncovered while writing his book. Here are five things you probably didn’t know about modern supermarkets.

Grocers don’t put milk in the back of the store to force you to walk by all the other products on the way. Supermarkets have a reputation for sneaky tactics: The produce is misted to make it look fresher, or the music is carefully chosen to put shoppers in a buying mood. But the grocers that Ruhlman talked to insisted there’s nothing nefarious about their stores’ design. “There’s no science or trickeration, other than just a nice easy flow through the store,” said one grocer. “You want to know why dairy is at the back? Because that’s the most efficient place to put these huge refrigerated cases.” (Misting, another grocer says, really does keep fruits and veggies fresher, and in his store, employees choose the tunes they want to listen to all day long.)

But some grocery stores really do allow companies to pay their way onto the shelves. It’s called a “slotting fee,” and it’s one way that stores make room for new products. “A grocery store is full,” writes Ruhlman, and in order for a new item to be added, something has to be removed. “Why should a store take a chance on an unknown product when their known products sell? Some grocery stores charge slotting fees for this reason, meaning they charge certain manufacturers for shelf placement.”

Fresh produce is sometimes not so fresh. Take apples, which are harvested in the fall. So how can supermarkets sell them year round? It’s not because they’re shipped in from greenhouses. Rather, it’s because they’ve been sitting around since the previous autumn. “Apple companies hold their apples in vast warehouses filled with a mixture of oxygen and carbon dioxide, which, in industry parlance, puts them to sleep,” writes Ruhlman. “This means that if you’re buying a ‘fresh’ American apple in August, it was harvested late last year.”

Expect more “product of Mexico” stickers on your produce soon. California currently supplies about a third of the nation’s veggies and two-thirds of its fruits and nuts. But maybe not for long, one produce industry veteran told Ruhlman. “Believe it or not, Mexico is probably going to outdo California,” he says. “They have everything you need to be successful and they don’t have the water problems California has, they don’t have the labor issues California has. And the quality of the product they’re producing is good.”

Superstores may soon go out of style. “I think stores are going to get smaller,” says Jeff Heinen, one of the grocers Ruhlman profiles. “If Amazon has its way, that stuff in the center of the store will all be delivered to your door. And we’ll go back to the old days, where it’s all specialty stores. We’ll be prepared food and specialty products and everything else will be so commoditized that we won’t be able to compete from a price perspective.”