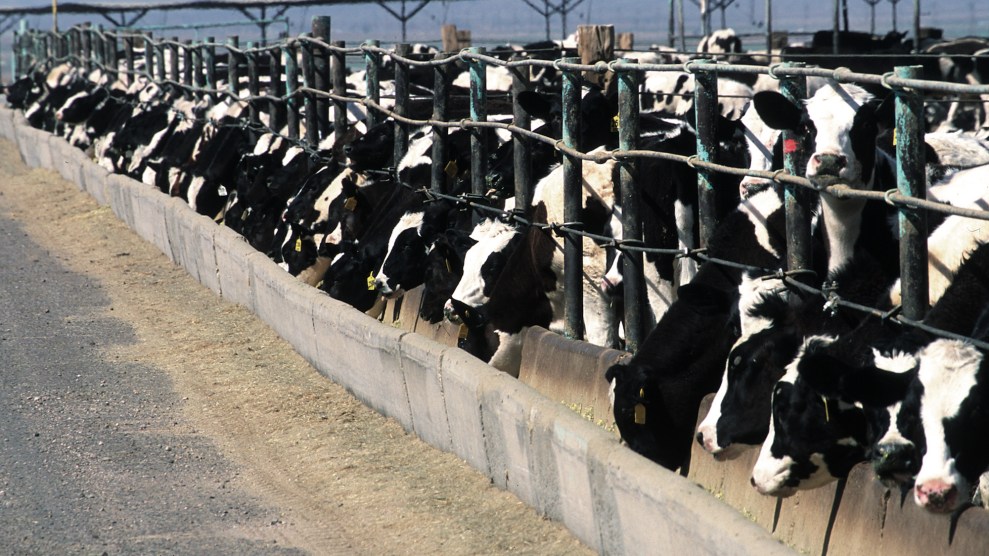 As his presidential bid struggles to gain traction, Sen. Cory Booker (D.-N.J.) is out with a bold new bill, introduced Dec. 16, that proposes a serious crackdown on two powerful industries: meat and dairy.

It might seem like a strange thing move for a candidate seeking to increase his broad appeal in a meat-loving nation—especially one who already flouts carnivory by embracing a vegan identity. Americans rank among the globe’s most voracious consumers of chicken, beef, pork, and dairy; and in 2020, US per capita meat production is expected to reach an all-time high.

But there’s a creeping unease about the way these foods are produced. Most of them come from factory-scale facilities known as CAFOs (concentrated animal feeding operations) that generate the potent greenhouse gases methane and nitrous oxide, and have been known to pollute water and foul air for surrounding communities.

The public’s growing discomfort with this system shows up in the booming popularity of alternatives to the animal-factory model—from pasture-based meats to high-tech soy-burger patties. And it’s evident in the way communities in livestock-heavy regions—Wisconsin, Iowa, North Carolina, Delaware/Maryland—are rebelling by filing lawsuits and demanding that the industry scale back. Generally, state governments in these meat-centric regions side with the industry against these appeals to hold the industry accountable for its environmental messes.  The federal government, even under Barack Obama but more so under Donald Trump, largely does the same.

Here’s where Booker’s bill comes in. It would place an immediate moratorium on new large-scale CAFOs. The bill would also halt the expansion of existing CAFOs over a certain size. And it would devote $100 billion over 10 years to a voluntary buyout program for CAFO owners who want to exit the business. The fund would also offer transition assistance to operators who want to take up “agriculture activities such as raising pasture-based livestock, growing specialty crops, or organic commodity production.”

The transition program is important, said Jake Davis, policy director of Missouri-based Family Farm Action, a non-profit that fights corporate control of agriculture, and that has worked with Booker’s office on farm policy. Large-scale chicken and hog growers tend to work under contract for the tiny handful of transnational companies that dominate the poultry- and pork-packing markets. The growers take on debt, often in excess of $1 million, to build out, maintain, and regularly upgrade vast barns, tailored to company specifications. For their trouble, contract poultry farmers on average “are likely to earn about $11.50 an hour” after accounting for operating and interest expenses, a 2014 United States Department of Agriculture study showed.

“Most contract contract growers I talk to, they wish they hadn’t gotten into that world to start with—it’s a hamster wheel that’s not easy to get off of,” Davis said. “If you don’t keep taking on more debt to upgrade your barns, you don’t get more birds or pigs [from the companies]; and if you stop, you can’t pay the note in your farm. ”

The bill probably won’t clear the Senate. But the ideas in it might just up the ante in the Democratic caucus in Iowa.

The bill would also bolster the Packers and Stockyards Act, a 1921 law designed to prevent the power imbalances that now exist between packer and farmers but that has gone largely dormant in recent decades. And it would make the packers responsible for the pollution produced by the CAFOs they rely on for animals. Currently, that manure pollution is the responsibility of the growers, though it is lightly regulated in general.

The bill has no chance of advancing in the Republican-controlled Senate. But the ideas in it might just up the ante in the Democratic caucus in Iowa, which takes place on Feb. 3. In a survey commissioned by Johns Hopkins University’s Center for a Livable Future and released Dec. 10, 63 percent of Iowans supported the idea of banning construction of new CAFOs and expansion of existing ones, and 80 percent expressed concern about the threat of water and air fouled by huge concentrations of manure.

As I noted last month, many leading Democratic candidates have proposed ambitious agricultural policy reforms, and two in particular—Sen. Bernie Sanders (D.-Vt) and Sen. Elizabeth Warren (D.-Mass.)—have called for antitrust action against the meat companies. Among candidates responding to a questionnaire by the Iowa Citizens for Community Improvement Action Fund, Sanders and Warren joined former Housing and Urban Development secretary Julian Castro in expressing support for a CAFO moratorium.  Sanders is the only candidate besides Booker to propose a substantial bucket of money to help current contract livestock growers to get out from under the thumb of the packers.*

As communities push back against manure pollution and contract farmers scrape by while packers like Tyson generate record profits, “we think there are a lot of people in rural America who are going to support policies that help farmers gain independence from corporate control,” Davis said.

Correction: The original version version of this piece stated that Booker was the only candidate to propose funds for livestock growers to transition out of contract work. Bernie Sanders’s green new deal plan proposes setting aside $41 billion “to help large concentrated animal feeding operations that have a large environmental impacts transition to ecologically regenerative practices.”