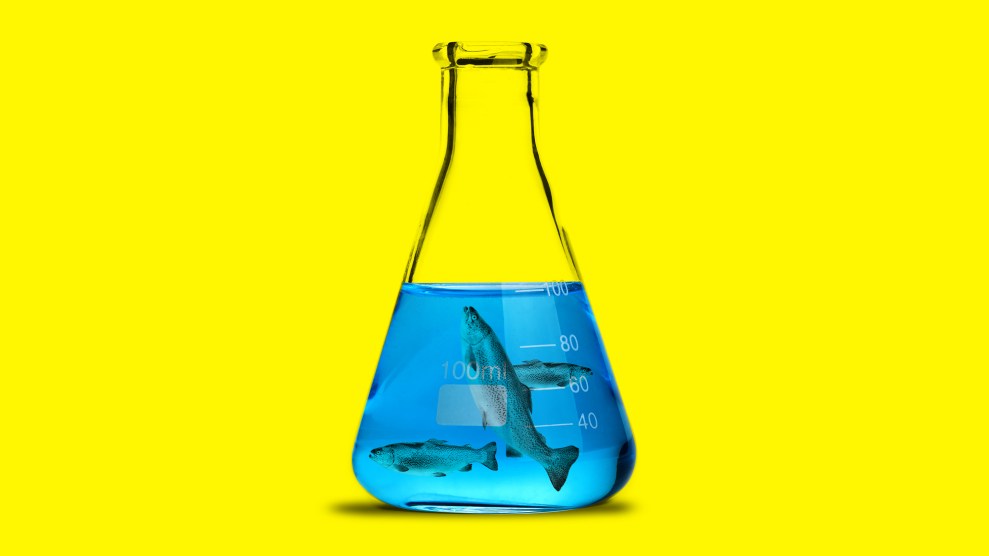 Do you love burgers—but not the animal cruelty and environmental degradation that go into making them? I come bearing good news: Someday, you might be able to get your meat fix, without all that bad stuff. Scientists can now grow animal flesh, without raising—or in most cases killing—an animal. This food, called “lab-grown meat,” “cell-based meat,” “cultured meat,” “cultivated meat,” “clean meat,” or as comedian Stephen Colbert jokingly called it in 2009, “shmeat,” has set off a flurry of media attention in recent years. Dozens of lab-grown meat companies have materialized, most aiming to solve the problems associated with large-scale beef, pork, poultry, and seafood production.

Finless Foods, a 12-person food-tech startup founded in 2017 and based in Emeryville, California, claims to be the first company to focus on lab-grown fish, although a handful of other startups have since joined them. In October, 28-year-old Finless Foods co-founder Mike Selden gave me a tour of their facility, and I dished about it on the latest episode of the Mother Jones food politics podcast Bite:

Selden and his co-founder Brian Wyrwas, both products of an agricultural biochemistry program at UMass Amherst, started the company, he says, to “make something good.”

“We started off with zebrafish and goldfish,” which already had a lot of cell biology research behind them, Selden explains. “From there, we did our first prototypes, which were carp.” The company grew tilapia, bass, rainbow trout, salmon, Mahi Mahi, lobster, and Fugu (poisonous pufferfish) meat before settling on Bluefin tuna, whose stocks have dropped sharply in the last few decades.

The idea behind lab-grown fish, Selden says, is multi-pronged. The technology, they hope, will prevent the killing of animals for food, cut down on overfishing, and eliminate mercury and microplastic contamination in seafood. “We see this as creating a clean food supply on land: no mercury, no plastic, no animals involved, and it can still meet people’s needs.”

Selden doesn’t like the term “lab-grown.” Industry insiders argue it makes their products sound artificial and unappetizing. He instead prefers to call it “cell-based.” He argues that the process of growing fish in a lab is actually very similar to how fish grow and develop in the wild.

It begins with a sample—about the size of a grain of rice—of real meat from a real fish. (The tuna doesn’t have to die during this process, but often does. In the  company’s two-and-a-half-year history, they’ve killed fewer than 20 tuna.) Those cells are put in a liquid “feed,” like a nutritious soup, which gives them the energy to grow and divide, just like they would in a real, growing fish.

Despite the obvious advantages of lab-grown fish, there aren’t any products on the market. For Finless Foods, the cost of making one serving of their fish is still too high for consumers. “I won’t say exactly what number it is,” Selden tells me, “but you’re not going to buy it.” This is true across the industry: lab-grown beef, at one point costing as much as $280,000 to produce a hamburger, is also still prohibitively expensive, though its price is expected to drop to a mere $10 in two years.

Hitting the right price is one of the industry’s biggest hurdles, if not the biggest one, according to Liz Specht, associate director of science and technology at the Good Food Institute, a nonprofit which lobbies for plant-based and cell-based alternatives to meat, dairy, and eggs. The industry, she says, has the science down. “What does need to happen—and I don’t want to downplay or trivialize how challenging this will be—is getting it to the scale and the price point that will ultimately be necessary.”

On top of that, Finless Foods is still working out the kinks on the flavor. The first iteration of its fish, carp served as a croquette and prepared by a local chef, which it unveiled in 2017, “didn’t taste like much,” Selden concedes. At the time, journalist Amy Fleming described it in a story for The Guardian as “delicious and disappointing.” When I called Fleming in November to get more detail about the taste, she said she recalls it being “crispy on the outside” and “smooth and delicate on the inside.” It had a subtle flavor of the sea, as the chef described it to Fleming, like water in an oyster shell. “They were really lovely,” she says, “But did taste of fish? It was hard to say. You couldn’t see any fish in there and you can discern any fleshy fish sort of texture.”

Now, after two more years of taste-tests Selden claims the flavor of his Bluefin is “really good.” “I think it tastes fantastic,” he says. “And I think that it really speaks for itself.” (I’ll have to take Selden’s word for it; at the time of my visit, they didn’t have any fish available for tasting.)

The company’s success could depend on finding the right flavor. When I ask Selden why people would choose his product over other alternatives, like sustainably caught or farm-raised fish, he says, “They won’t.” He elaborated: “We’re specifically shooting for people who really don’t care about sustainability.” To appeal to seafood connoisseurs, he says, his company plans to first sell to upscale restaurants rather than grocery stores. Fine dining, he believes, is an “easier way to get public perception on your side—especially when we’re specifically searching for foodies rather than for a sustainably-minded consumer.”

Funders seem to agree—they have already invested millions of dollars into Finless Foods. Early supporters include an aquaculture investment firm based out of Norway called Hatch, an Italian food science company, Hi-Food, a Japanese tuna company, Dainichi Corporation, and Draper Associates, a venture capital firm founded by Silicon Valley investor Tim Draper. Animal welfare organizations including PETA and Mercy for Animals have voiced support for lab-grown meat as a whole. And according to a 2018 survey conducted by Faunalytics, a non-profit animal advocacy research organization, 66 percent of consumers were willing to try clean meat.

There is one group of people that likely isn’t so enthusiastic about lab-grown seafood: fishermen. “I think that we need essentially a Green New Deal but for agriculture,” says Selden. He believes a jobs guarantee might alleviate some of the growing pains associated with transitioning to a partial lab-grown meat food system. “I think that the people who are doing that fishing, are doing that farming, we need to provide something for them so that they can still survive, even if we transition out of their industry as a method of food production.”

It is yet to be seen whether Finless Foods’ sashimi will win over die-hard seafood fanatics. Then again, they might not have a choice: As climate change worsens, and the ocean becomes too hot, too acidic, too polluted, and over-fished, it’s possible that one day some types of seafood may come only in a lab-grown variety. As Specht told me, “I think cultivated meat may truly be our only option for preserving the diversity of aquatic species we eat.”