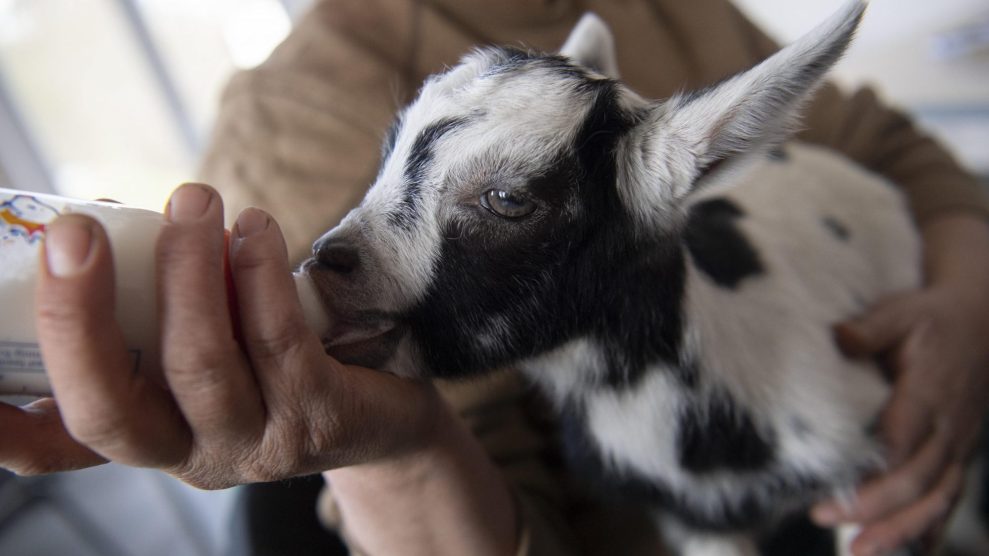 Goats are an overlooked tool in the arsenal for rural, isolated communities to improve their resiliency during the COVID-19 pandemic, according to a pair of farmers from a remote island in British Columbia.

And not in the questionable way medieval doctors advised families to share quarters with smelly billy goats, so the pungent odor would counteract the sickening miasma, or “bad air” associated with the bubonic plague.

Farmers Janice and Gerald Ammundsen have long encouraged folks on Quadra Island who possess adequate forage land to consider adding a goat to their household to improve food sovereignty, both at a family and community level.

“We’re trying to push the availability of goats into people’s backyards and create a situation where a family can produce its own dairy and meat in a sustainable way,” said Gerald, who has an agriculture degree with a specialty in dairy science. “Two does can feed a family of six.”

Their agenda is more critical now that COVID-19 is posing potential supply chain issues and threatening food security in their rural island community, the couple said.

“We’re getting more calls than ever before for milking goats,” said Janice, scratching the chin of the baby goat in her arms. “And never mind goats, everybody is also planting gardens and getting chickens.”

Quadra Island, a ferry-dependent community with a population of less than 3,000 residents, is located off the northeast coast of Vancouver Island.

Islanders are concerned about being at the end of a very long supply chain during COVID-19, Gerald said.

“The economy is not sustainable, and wasn’t even before COVID-19,” Gerald said. “Our food comes from far away in great quantities. Janice and I have been working for eight years to live self-sufficiently, and it’s not possible.

“We’ll have to adapt and learn to eat differently. We can produce enough food for Quadra, but it will require the entire population to do it,” says Quadra Island Farmer Gerald Ammundsen on improving food sovereignty due to COVID-19.

The couple works a two-hectare parcel of land that supports an extensive vegetable garden, a flock of chickens and a trio of handsome but noisy, mean-spirited geese.

But the heart of the Ammundsen enterprise is their beloved herd of goats. They have a total of 34 goats, including 22 recently born kids, and more on the way.

At the moment, the small farm is cute pandemonium, with a blur of baby goats in constant movement, leaping and bouncing off their moms, each other, stairs, rocks or logs.

Their free-range goats are producing triplets and quadruplets because they are so healthy and well fed, Gerald said. But breeding successes don’t necessarily translate into stable revenue. Gerald’s income as a gas and pipe fitter subsidizes raising the goats.

“We feel that producing our own quality food is priceless,” Janet said. “We couldn’t produce these animals for other homesteads without Gerald’s income from being a tradesman. But selling a dairy goat so inexpensively is really a community service to encourage local food security.”

The animals are well suited to Quadra’s habitat, which doesn’t have an abundance of good farmland or open pasture, Gerald said. Requiring less land than a cow, they can forage in the undergrowth of wooded areas, eating things such as brambles or downed tree branches, supplemented by some grains and hay.

But potential owners have to carefully consider if they are willing to commit the time and resources to the animals’ wellbeing, Janice stressed. “Sometimes it makes more sense for people to herd share. And not everybody has to have a flock,” she said.

Goats or gardens may improve the food security for individual families with the skills and resources to take on those projects, but systemic change that supports small- and medium-sized farmers is needed to truly establish food sovereignty for an entire island or region, said food sovereignty expert Hannah Wittman.

“COVID-19 is making visible these really deep cracks in our food system,” said Wittman, academic director of the Centre for Sustainable Food Systems at UBC Farm and professor in the faculty of land and food systems.

“We don’t have the necessary public infrastructure to sustain a regionally resilient food system because a lot of our agriculture investment is focused on exports.”

Most estimates suggest BC can only meet 50 percent of its food consumption needs from provincial production, Wittman said.

“We depend on a lot of imported food to fill that gap. But, we also export a lot of food,” she said. “So, it’s about shifting the distribution of what is produced, and where it’s produced, to improve food self-sufficiency.”

Wittman defined the difference between aiming for food security and food sovereignty; food security measures the extent to which food is available, stable and nutritious, but it doesn’t focus on where the food comes from or how it is produced, she said. Food sovereignty refers to the ability of local peoples to control their own food systems, prioritizing equity and sustainability.

Food sovereignty doesn’t necessarily have to be “hyper local,” she said.

“I don’t think it has to take place on an island by island basis,” Wittman said.”In the past, it’s been about regional food systems that involve trade based on principles of fairness and equity between different people producing different things necessary for survival.”

Small- and medium-sized farmers are at risk of extinction due to poor earnings, skyrocketing land prices, lack of labour and difficulty attaining appropriate inputs from governments that tend to invest in large-scale consolidated farming, Wittman said.

​​​​​​”What has gotten squeezed out are these middle-sized, highly diversified, regionally adapted farming systems that had grown up to feed regional populations,” she said.

Regional food hubs or cooperatives, which see smaller farmers pool resources to increase production capacity and to meet a region’s wholesale and retail demands would see them enter a larger, stable market, she added.

“Not every farmer wants to go to farmers’ markets, but most want to sell their food locally,” Wittman said.

Governments have succumbed to lobbying by corporate dairy producers that must pasteurize their product because of the health hazards associated with industrial farming practices, Gerald said.

“Governments in North America are in the pockets of corporations and protecting their profit margins,” he said. “They have decreed that raw milk is a biohazard and health risk.”

European nations have long understood the health benefits of raw milk, he added.

“That’s also why we’re encouraging families to produce their own milk. You can milk your own goat.”

The COVID-19 crisis is going to change the way locals look at food and the role they might take to produce or support it, Gerald said.

“We’ll have to adapt and learn to eat differently. We can produce enough food for Quadra, but it will require the entire population to do it,” he said.

Most people hope things will return to normal, but that’s unlikely, he said.

“That economy is not coming back. We’re going to have to move back to what farming was like 250 years ago,” he said. “The sooner we can acclimatize, and enjoy that lifestyle, the better off we’ll be.”