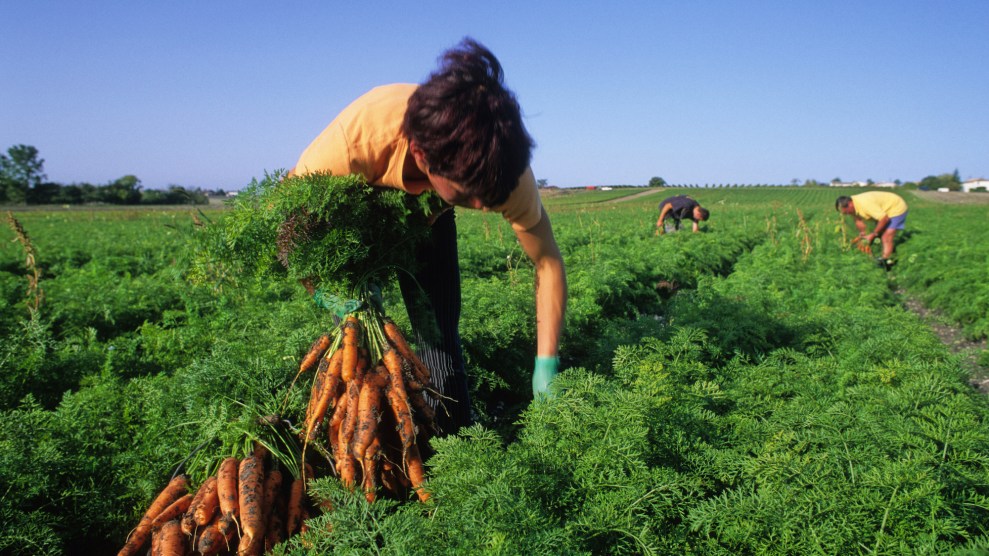 As the coronavirus lockdown settled in last month, the US government made a decision that sent shockwaves through the agriculture industry: It closed its embassy and consulates throughout Mexico. The move abruptly halted the issuance of new temporary-work permits, known as H-2A visas, for Mexican citizens seeking work in the United States—shutting off a key source of labor. The farms that feed us have grown so reliant on H-2A workers, Mother Jones immigration reporter Fernanda Echavarri explained at the time, that the move “could have massive consequences for American growers and cause a shortage of fruits and vegetables for consumers.”

On April 15, the Department of Homeland Security sought to ease the labor crunch. The agency issued a temporary order to give employers more flexibility to hire H-2A workers who are already in the United States, in order to “avoid disruptions in lawful agricultural-related employment, protect the nation’s food supply chain, and lessen impacts from the coronavirus (COVID-19) public health emergency.” Farms in the US have become increasingly reliant on H-2A workers; annual visas issued under the program rose from around 32,000 in 2005 to more than 200,000 last year, representing around 10 percent of the farm labor force.

The DHS order changes how the visa works in a few different ways. Under normal circumstances, an H-2A worker who has served his or her term with an employer (which usually lasts around six months) would have to return to Mexico and obtain a new visa before reapplying to work at a US farm again. The new DHS order removes that requirement. The policy also allows H-2A workers to stay beyond the current three-year maximum allowable period in the United States.

But while the new policy may ease labor shortages on farms, it does nothing to alleviate the increasing burden being felt by the workers who keep our food supply moving as the majority of the country remains under stay-at-home orders, farm worker advocates say.

“The Administration has done nothing to require H-2A program employers to provide safety and health protections or access to sick leave or health care.”

Deemed essential workers by the federal government, the largely immigrant US farm workforce tends to harvest in groups and live in tight quarters, meaning it’s often difficult if not impossible to maintain social distance. “Many farmworkers are reporting that they are not receiving adequate information or protection against COVID-19 and that they do not have access to testing or health care,” Bruce Goldstein, president of Farmworker Justice, wrote in an email. “The Administration has done nothing to require H-2A program employers to provide safety and health protections or access to sick leave or health care.”

Evy Peña, communications and development director for the Mexico-based NGO Centro de los Derechos del Migrante, says the new rules could actually exacerbate an already-steep “power imbalance” between H-2A workers and their bosses. The NGO recently released a report based on interviews with 100 Mexican nationals who had been H-2A workers in the United States within the past four years. They found that most participants arrived to their jobs in debt—for travel expenses and/or recruitment fees—and a third described “restrictions on their movement, such as not being permitted to leave the employer-provided housing or worksite.” Seven of the workers surveyed reported having their passports confiscated by their bosses during their stints—an illegal practice that gives employers complete control over workers’ movements. Under such conditions, the ability to hire workers directly from other farms could enable trafficking, Peña said.

The challenges faced by H-2A workers have been documented for years. In a 2013 report examining the program’s impact in the South, the Southern Poverty Law Center concluded that guest workers are “routinely cheated out of wages, forced to mortgage their futures to obtain low-wage, temporary jobs, and held virtually captive by employers.” In her 2018 report from California wine country, Mother Jones’ Maddie Oatman found that guest workers there frequently live in isolation, often “prohibited from receiving visitors” at their farmer-supplied living quarters.

The new DHS rules come on the heels of a report from NPR’s Franco Ordoñez that US Department of Agriculture secretary Sonny Perdue is working with new White House Chief of Staff Mark Meadows to “see how to reduce wage rates for foreign guest workers on American farms, in order to help US farmers struggling during the coronavirus,” citing “US officials and sources familiar with the plans.”

Perdue has been musing about cutting wages for temporary farmworkers since January, well before the COVID-19 crisis set in. As I explained in a January post, guest-worker wages are set through a mechanism that prevents farmers from paying them less than the prevailing rate in the surrounding area, which would undermine bargaining power for other nearby workers. This “adverse effect wage rate,” calculated for each state by the department of labor using USDA surveys, ranges from in $11.71 in Florida, Alabama, and Georgia to around $15 on the west coast.

According to Daniel Costa, director of immigration law at the Economic Policy Institute, the nationwide average pay rate for H-2A workers is $12.96 per hour—and the rate is even less in “some of the biggest H-2A states.” So while farm workers continue to risk their lives to keep the nation fed during a global pandemic and economic meltdown, Trump’s USDA is figuring out how to cut their wages, not compensate them with hazard pay.

Costa called on the labor department to put out an emergency regulation requiring additional spacing in employer-provided housing and on buses, because he says the terms of H-2A employment make the workers especially vulnerable to catching and spreading the coronavirus. “It’s shocking that a number of actions have now been taken to prioritize the ability of employers to get H-2A workers,” he says, “but there’s been zero effort to ensure that H-2A workers are able to stay safe and healthy during the pandemic.”