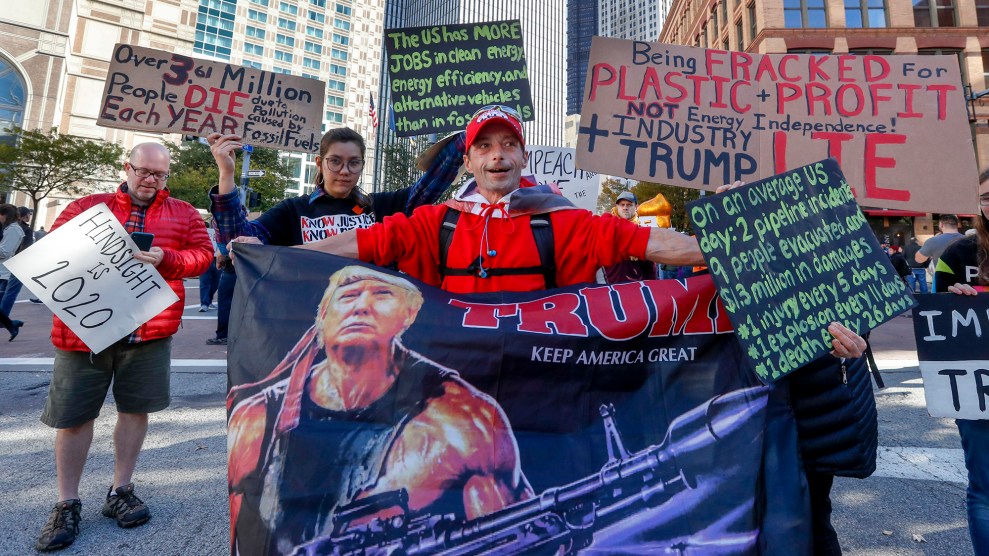 President Trump made an appearance at a pro-fracking conference in Pittsburgh yesterday, and I went downtown to keep an eye on the protests and demonstrations.

One thing that I’ve been reporting on a bit lately is the crazy Crowdstrike conspiracy theory that President Trump apparently believes. To recap: When the White House released its account of the July 25 call between Trump and Ukrainian President Volodymyr Zelensky, people were scratching their heads at Trump’s request that his counterpart “find out what happened with this whole situation with Ukraine, they say Crowdstrike…the server, they say Ukraine has it.”

Crowdstirke, a California-based cybersecurity firm, has been a particular focus of Trump’s since at least early 2017 when, in an interview scheduled to mark his hundredth day in office, he aired thoroughly debunked conspiracy theories suggesting that the company was part of some plot to hide who really hacked the Democratic National Committee. Although the US intelligence community has concluded Russia was responsible, if someone else had done it, it would dispel a cloud hanging over his 2016 election and undermine a key rationale that animated special counsel Robert Mueller’s investigation. Even though his former senior advisers have told him it’s not true, and his own Department of Justice has said it’s not true, the theory hangs on with the president and his supporters in Congress, two of whom brought it up in an election security hearing this week.

The president cared enough about the theory to include it in the broader push for Ukrainian investigations that now imperils his presidency. But are his supporters anywhere near as interested? While I was downtown, I asked a few Trump supporters demonstrating on the president’s behalf outside the event about Crowdstrike, to find out. And in short, they’re not.

Joe Herman of Pittsburgh told me that “there’s lots of issues concerning the whole horizon of what’s going on in this country politically and socially… I wouldn’t say it’s one of the big, main focal points among Trump supporters that I’ve heard.”

Randy Rodosky, a Trump supporter from Munhall, Pennsylvania, claimed he’d heard about it “on basic news, and I’ve heard it on Fox News.” But when I asked him for details he didn’t have any, and instead performed a familiar pivot. “What Hillary Clinton did was absolutely beyond excuse, and that’s all I can say. I don’t think Trump did anything wrong…Hillary Clinton’s 30,000 deleted emails tell it all.”

“I don’t really know anything about computers,” said one man I spoke to about the Crowdstrike theory. That may have been true, but the next thing he told me illustrated the value of the president’s conspiracies, even if his supporters don’t grasp the details: “I do definitely believe that he wouldn’t have brought it up if there wasn’t something there.”