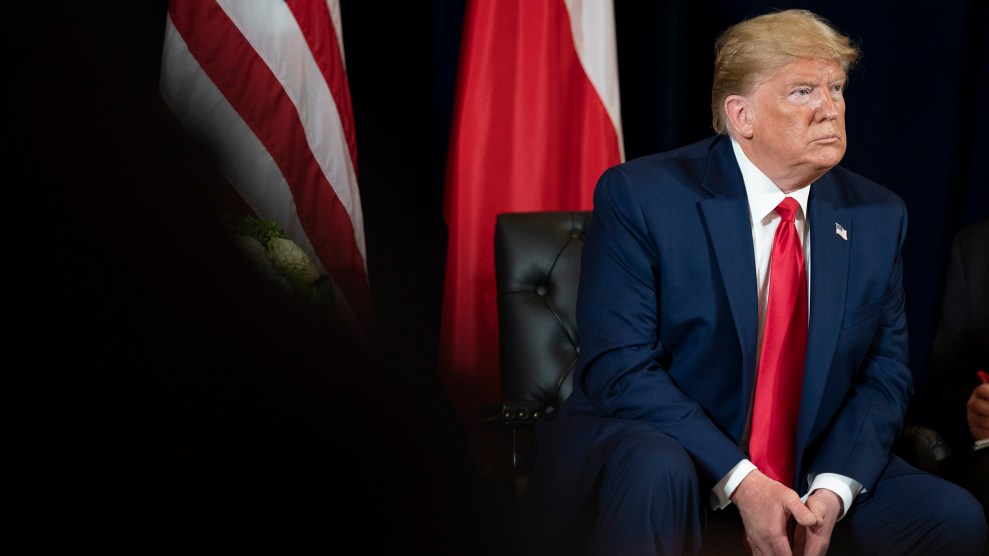 The White House released a memorandum memorializing a July phone call between President Donald Trump and Ukrainian President Volodymyr Zelensky on Wednesday, hoping it would show that the president’s self-admitted effort to get the government of Ukraine to dig up dirt on Joe Biden wasn’t nearly as bad as preliminary reporting based on a whistleblower complaint had made it sound.

While the document largely substantiated the whistleblower’s alleged complaint, it also revealed that Trump had pressed Zelensky to investigate CrowdStrike, a private cyber security firm that the Democratic National Committee hired in 2016 to probe whether it had been hacked, and that Trump incorrectly suggested is owned by a Ukrainian. The request was an outgrowth of his longstanding grievances over the 2016 election, Hillary Clinton, and her emails.

The president’s supporters have claimed CrowdStrike was involved in a plot to manufacture a fake Russian hack.

Despite the US intelligence community’s 2017 finding that the Russian government orchestrated the infiltration of the Democratic National Committee, some of the president’s supporters have long claimed CrowdStrike’s founders, Shawn Henry and Dmitry Alperovitch, were involved in a plot to manufacture a fake Russian hack to divert attention from a Clinton loss or to strengthen public perceptions about Trump’s Russia connections. Proponents of the theory posit that the DNC and CrowdStrike never allowed the FBI to independently verify CrowdStrike’s findings about Russian hacking. In June, a senior Justice Department lawyer said the department had in fact done so.

“With regards to our investigation of the DNC hack in 2016, we provided all forensic evidence and analysis to the FBI,” CrowdStrike said in a statement following the document’s release. “As we’ve stated before, we stand by our findings and conclusions that have been fully supported by the US Intelligence community.”

The two leaders’ exchange about the company came not long after Trump had twice emphasized the US’s “very very good” support for Ukraine, and complained about a lack of reciprocity in the relationship, and immediately after Zelensky spoke about his country’s desire to purchase US made weapons. Trump then asked Zelensky for a favor:

Zelensky didn’t directly respond to the CrowdStrike reference, instead pivoting to an assurance that Ukraine would work to “open a new page on cooperation in relations between the United States and Ukraine.”

Trump has previously discussed the company in public, associating it with supposed malfeasance by Clinton and the Democrats. He brought it up in an interview with the Associated Press in April 2017, falsely claiming it was based in Ukraine.

TRUMP: …. If they had the proper defensive devices on their internet, you know, equipment, they wouldn’t even allow the FBI. How about this, they get hacked, and the FBI goes to see them, and they won’t let the FBI see their server. But do you understand, nobody ever writes it. Why wouldn’t (former Hillary Clinton campaign chairman John) Podesta and Hillary Clinton allow the FBI to see the server? They brought in another company that I hear is Ukrainian-based.

Jessie K. Liu, the Trump appointed US Attorney for the District of Columbia, shot down this notion in June of this year, asserting in court that the Department of Justice had “independently verified” CrowdStrike’s findings. It’s unclear where Trump may have gotten the notion the company is Ukrainian owned or based, or that a computer server relevant to its investigation could be in that country. While Alperovitch was born in Moscow, conspiracists have suggested his role as a fellow at the Atlantic Council and that think tank’s history of funding from Ukrainian oligarch Victor Pinchuk—who has also donated to the Clinton Foundation—represent significant connections between the California company and the Eastern European country.

On Wednesday, Trump was asked if he believed Hillary Clinton’s emails were specifically located in Ukraine, responding “I think they could be.”

CrowdStrike was founded in 2011, but first came to wide public attention in June 2016, after the DNC announced it had been hacked in a Washington Post story. CrowdStrike’s investigation into the breach, released that month, found two sophisticated Russian military or intelligence hacking operations within the DNC’s network, one lasting a matter of months, the other going back at least a year. The operations, which incorporated basic spear phishing attacks into a broader and more sophisticated operation, also targeted Hillary Clinton’s presidential campaign, and the Democratic Congressional Campaign Committee. Emails and documents taken from all three were later publicized via WikiLeaks, on DCLeaks.com, and through the Guccifer 2.0 persona on Twitter and a WordPress blog.

The Russian hacking operation was central to question of whether Trump and his associates conspired with the Russian government and a key investigative focus of former Special Counsel Robert Mueller, whose office indicted 12 Russian military intelligence officers, charging them with carrying out the country’s operations targeting the 2016 elections.

Listen to Mother Jones Washington Bureau Chief David Corn explain what happens next in the Trump-Ukraine scandal in a special impeachment edition of the Mother Jones Podcast:

This article has been updated to include Trump’s Wednesday comments.