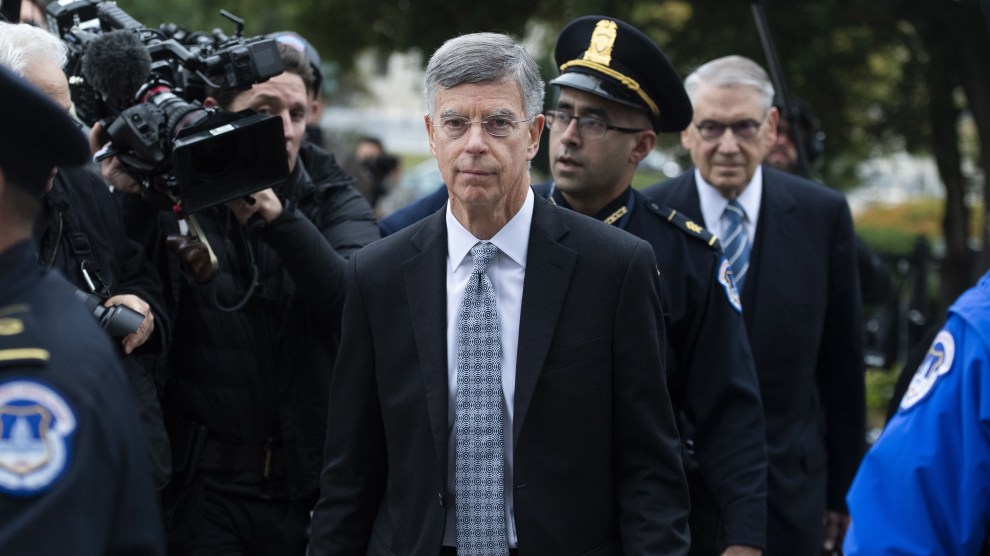 The top US diplomat in Ukraine testified Tuesday that he was informed by a Trump administration official that the president had conditioned military aid for the country on an investigation into Trump’s political rivals, the Washington Post reports.

In closed-door testimony to House impeachment investigators, William B. Taylor alleged that he had been told by Gordon Sondland—the GOP megadonor and hotel magnate who Trump appointed as ambassador to the European Union—that both military assistance for the war-torn country and a White House visit for its new president would be contingent on an announcement that Ukrainian officials would investigate Democrats. The Post, which obtained Taylor’s opening statement, reported:

“During that phone call, Amb. Sondland told me that President Trump had told him that he wants President [Volodymyr] Zelensky to state publicly that Ukraine will investigate Burisma and alleged Ukrainian interference in the 2016 election,” Taylor said in the statement…

“Amb. Sondland also told me that he now recognized that he had made a mistake by earlier telling the Ukrainian officials to whom he spoke that a White House meeting with President Zelensky was dependent on a public announcement of investigations—in fact, Amb. Sondland said, ‘everything’ was dependent on such an announcement, including security assistance,’” Taylor told House investigators.

“He said that President Trump wanted President Zelensky ‘in a public box’ by making a public statement about ordering such investigations.”

In his July call with Zelensky, Trump asked the Ukrainian president to cooperate with Attorney General Bill Barr and Rudy Giuliani, Trump’s personal lawyer, on matters related to Burisma—a Ukrainian gas company tied to Biden’s son—as well as on a series of conspiracy theories surrounding the 2016 election and the origins of the FBI’s Russia probe. Rep. Debbie Wasserman Schultz (D-Fla.), a member of the House Oversight and Reform Committee who witnessed Taylor’s deposition, told the New York Times Tuesday that Taylor “drew a very direct line…between President Trump’s decision to withhold funds and refuse a meeting with Zelensky unless there was a public pronouncement of him by investigations of Burisma and the so-called 2016 conspiracy theories.”

Trump has insisted that there was no connection between the suspension of military aid to Ukraine and his attempts to pressure Zelensky into investigating Democrats, often repeating the phrase “no quid pro quo.” But Trump’s chief of staff, Mick Mulvaney, publicly contradicted this line last week, when he appeared to admit that Trump had indeed linked military aid to an investigation related to the 2016 actions of the Democratic National Committee, which Wasserman Schultz ran at the time. Mulvaney later attempted to retract that admission.