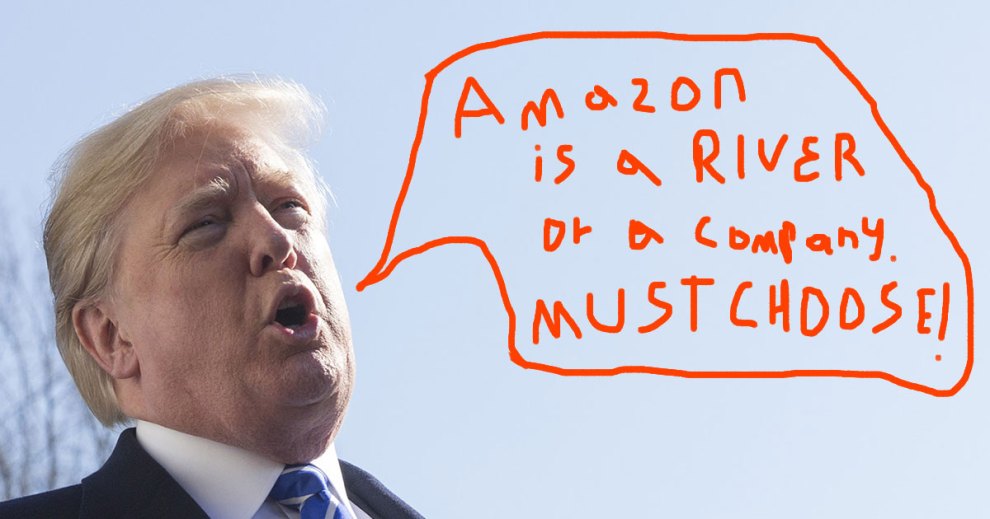 This is not a real thing Trump said. But it doesn't seem like something he wouldn't say, does it?Shutterstock

On Friday, the Pentagon awarded a massive cloud computing contract to Microsoft. People had been expecting the contract to go to Amazon and the switcheroo led many to assume President Trump intervened, given his regular complaining about Jeff Bezos and the “Amazon Washington Post.” Quoth said paper:

Few thought Microsoft would beat out Amazon for the massive contract, and legal analysts said the president’s role in the procurement will almost certainly become the subject of litigation.

“It’s crystal clear here that the President of the United States did not want this contract to be awarded to one of the competitors,” said Franklin Turner, an attorney with the law firm McCarter & English. “As a result it’s fairly likely that we will see a number of challenges that the procurement was not conducted on a level playing field.”

Guy Snodgrass, one-time aide to former Defense Secretary Jim Mattis, alleged in a book that was published only recently that Trump had indeed attempted to intervene. Here’s Task & Purpose, via Jake Tapper:

Trump called Mattis in the summer of 2018 and directed him to “screw Amazon” out of a chance to bid on a $10 billion cloud networking contract.

Snodgrass writes: “Relaying the story to us during Small Group, Mattis said, ‘We’re not going to do that. This will be done by the book, both legally and ethically.”

The Department of Defense defended its decision in a statement yesterday, saying that that everything was mad legit:

“The acquisition process was conducted in accordance with applicable laws and regulations.”

and totally cool and stuff:

All parties, the statement said, “were treated fairly and evaluated consistently with the solicitation’s stated evaluation criteria.”

But not everyone is convinced!