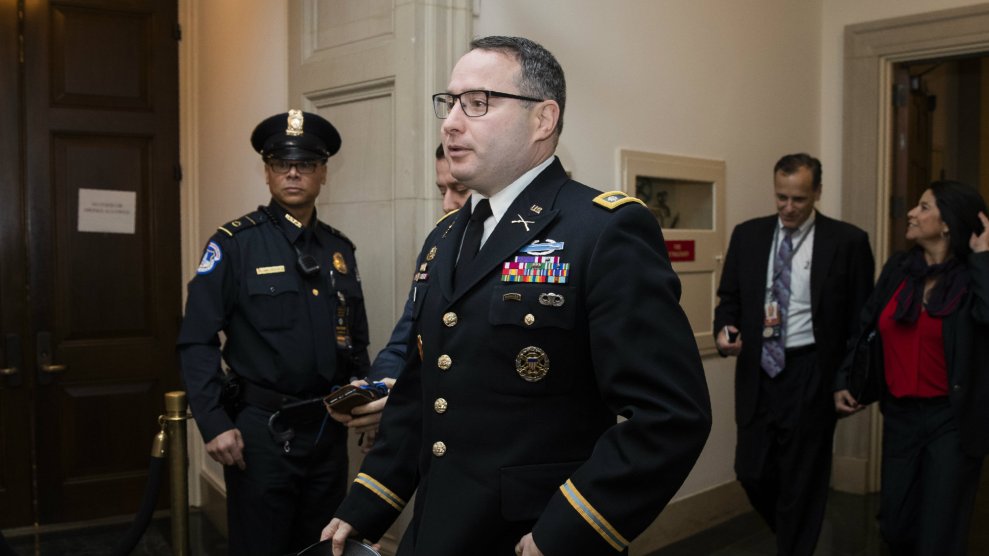 “My worst fear of how our Ukraine policy could play out was playing out.” That’s how Lt. Col. Alexander Vindman described what was going through his head while he was listening to President Donald Trump’s July 25 phone call with Ukrainian President Volodymyr Zelensky that’s at the heart of the House’s impeachment inquiry.

The moment came while Rep. Sean Maloney (D-N.Y.) was questioning Vindman, who is the Ukraine expert on the National Security Council. “Frankly, I couldn’t believe what I was hearing,” Vindman said. “Now this was likely to have significant implications for US national security.” Maloney asked him why he immediately reported the phone call and Vindman replied, “because that was my duty.”

"Frankly, I couldn't believe what I was hearing," Lt. Col. Alexander Vindman told lawmakers when asked what went through his head when listening to President Trump's phone call with Ukraine's president. https://t.co/hCQkQ65AGD pic.twitter.com/QiUSMAH7q4

Throughout Vindman’s testimony in front of the House Intelligence Committee on Tuesday, the Republican line has been to question Vindman’s loyalty to Trump, which has caused worries about his safety. Meanwhile, the White House’s twitter account has been pushing the familiar GOP narrative that Vindman is another “Never Trumper” who is not to be trusted:

"I have never met the President."

"I don’t know what the President was thinking."

“I've never had any contact with the President of the United States.” pic.twitter.com/LvnAPOIKCw

Tim Morrison, Alexander Vindman's former boss, testified in his deposition that he had concerns about Vindman's judgment. pic.twitter.com/xwHOt4bsHS

But despite efforts to question Vindman’s judgement and loyalty—Trump even questioned why he was wearing his military uniform, echoing a talking point from right-wing outlets that Vindman was wearing it as a stunt—Maloney praised his dedication to his duty and reminded him of what he said to his dad in his opening statement:  “Do not worry, I will be fine for telling the truth.”