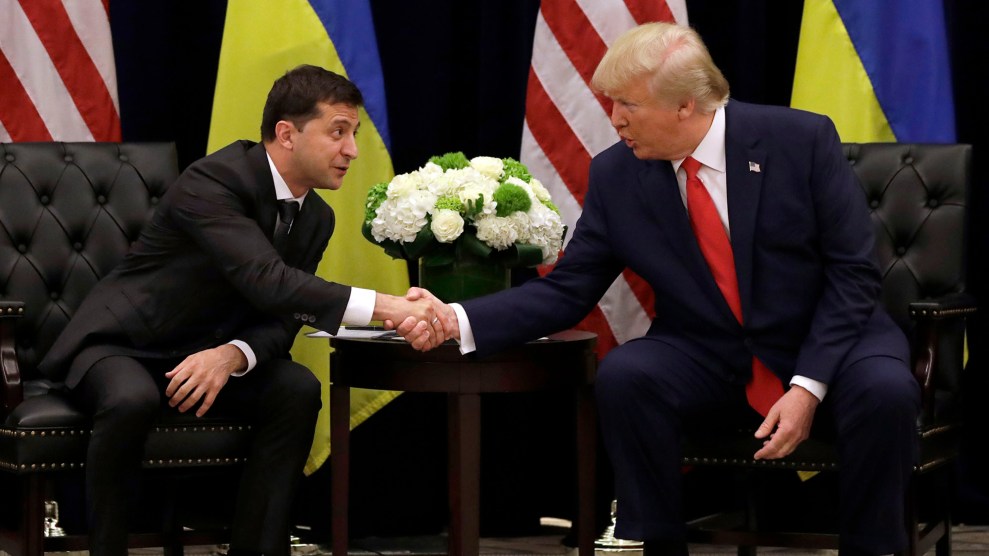 During his opening testimony on the first day of the House impeachment hearings, Bill Taylor, the top US diplomat in Ukraine, dropped a bombshell: A member of his staff had overheard a phone call between President Trump and US Ambassador to the EU Gordon Sondland in which the president asked Sondland about “the investigations” and Sondland replied “that the Ukrainians were ready to move forward.” After the call concluded, according to Taylor, the staffer “asked Ambassador Sondland what President Trump thought about Ukraine.” Taylor testified that Sondland “responded that President Trump cares more about the investigations of Biden, which [Trump personal attorney Rudy] Giuliani was pressing for.”

According to Taylor, this incident took place on July 26—the day after the infamous phone call in which Trump pressured Ukrainian President Volodymyr Zelensky to pursue investigations related to Trump’s political enemies, including Joe Biden and his son. Taylor noted that he understood “investigations” to be a short-hand term used by Sondland for the politically motivated probes Trump wanted the Ukrainians to pursue.

Taylor added that he only learned of the July 26 phone call between Trump and Sondland after he gave his initial deposition on October 22 and that he has since reported it to the State Department’s legal adviser and the House Intelligence Committee.

During his opening testimony today, Bill Taylor, the top US diplomat in Ukraine, dropped a bombshell: A member of his staff overheard a phone call in which President Trump asked US Ambassador to the EU Gordon Sondland about investigations into the Bidens. https://t.co/uMU7oHJaIW pic.twitter.com/ovzf7ho7ic

On September 25 at the UN General Assembly session in New York City, President Trump met President Zelenskyy face-to-face. He also released the transcript of the July 25 call. (The United States gave the Ukrainians virtually no notice of the release, and they were livid.) Although this was the first time I had seen the details of President Trump’s July 25 call with President Zelenskyy, in which he mentioned Vice President Biden, I had come to understand well before then that “investigations” was a term that Ambassadors Volker and Sondland used to mean matters related to the 2016 elections, and to investigations of Burisma and the Bidens.

Following the call with President Trump, the member of my staff asked Ambassador Sondland what President Trump thought about Ukraine. Ambassador Sondland responded that President Trump cares more about the investigations of Biden, which Giuliani was pressing for. At the time I gave my deposition on October 22, I was not aware of this information. I am including it here for completeness. As the Committee knows, I reported this information through counsel to the State Department’s Legal Adviser, as well as to counsel for both the Majority and the Minority on the Committee. It is my understanding that the Committee is following up on this matter.