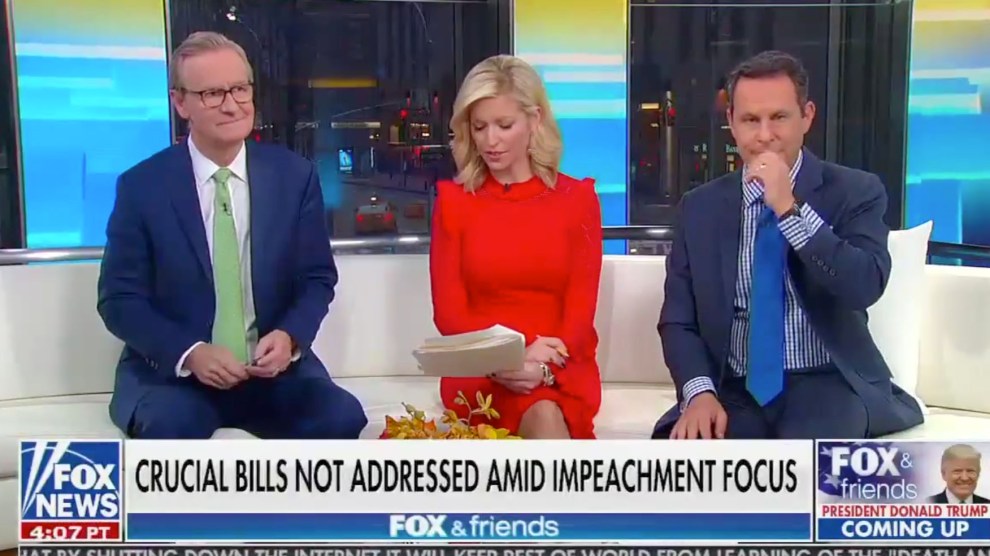 In a hard pivot from what you’d ordinarily see on Fox & Friends, host Ainsley Earhardt made a desperate plea on behalf of Americans everywhere Friday morning: “We want gun safety.”

Earhardt was complaining about the impeachment hearings, making the argument that the time and attention spent investigating the Ukraine scandal was preventing Congress from moving forward on other important issues, like gun safety. To the tape:

Ainsley Earhardt: “America is not stupid. They are watching this happen. It’s weeks and weeks of impeachment. And they’re screaming, please we want gun safety”

Is this a joke? Where was this after Sandy Hook, San Bernardino, Pulse, Parkland, Las Vegas, El Paso or Dayton? pic.twitter.com/Af2GL22aMD

Let’s back up a second. After each of the countless mass shootings in recent years, when a majority of Americans call on Congress to strengthen gun control laws, Fox & Friends hasn’t exactly joined that chorus of calls. Here’s what Earhardt had to say about gun control laws after the El Paso shooting, nearly four months ago:

Ainsley Earhardt says gun control is irrelevant and useless because "if you're bad enough" to massacre people, "you're bad enough to steal a gun." pic.twitter.com/LjHvd7ZsgD

And in September, Tony Perkins, the president of the anti-LGBTQ Family Research Council, went on Fox & Friends to blame gun violence on “an absence of morality” and lack of religion, rather than loose gun laws.

Of course, impeachment isn’t the reason gun control legislation hasn’t moved. As Cydney Hargis, a researcher at Media Matters For America notes, the Democratic-controlled House has already passed gun control legislation, which Senate Republicans have refused to vote on. After an outbreak of mass shooting this summer, President Donald Trump promised to put forward his own gun control proposal. He has not done so.