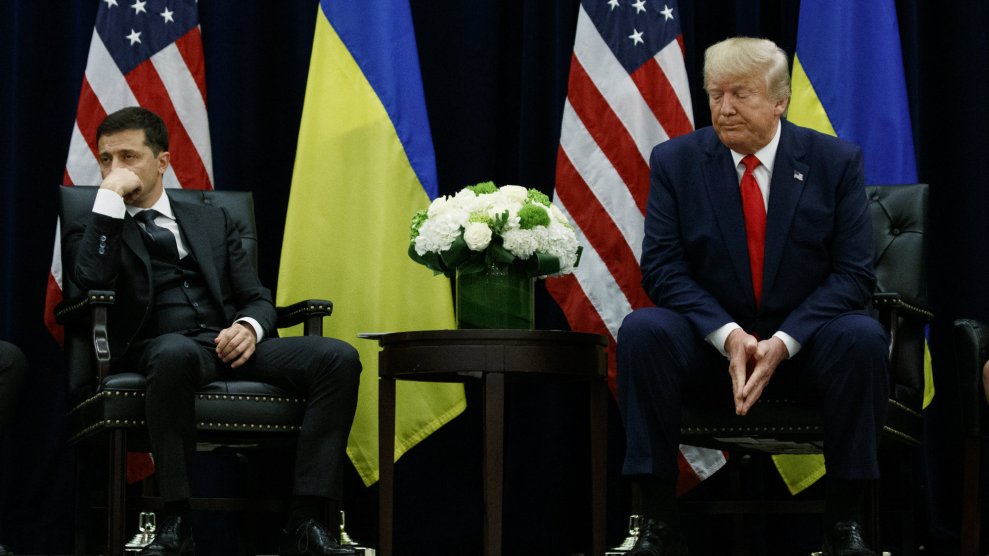 Minutes before the start of the House’s second public impeachment hearing, the White House released the rough transcript of President Donald Trump’s April phone call with Volodymyr Zelensky, the newly elected president of Ukraine. The release of that conversation—which took place three months before the now infamous July 25 phone call in which Trump asked Zelensky to do him a “favor” by investigating Trump’s political enemies—appears to be intended by the White House to help Trump’s case. Instead, it raises new questions about Trump’s efforts to pressure Ukraine into aiding his personal political fortunes.

According to the newly released document, which isn’t a verbatim transcription, Trump used the April 21 call to congratulate Zelensky on his electoral victory. During the conversation, Zelensky repeatedly invited Trump to his inauguration—a key request from a US ally hoping to demonstrate that it had strong international support in its ongoing conflict with Russia. Trump responded that he would “look into it” but added that in any case, “we will have somebody, at a minimum, at a very, very high level, and they will be with you.”

But despite promising to send a “very high level” official, Trump reportedly blocked Vice President Mike Pence from attending the inauguration, sending Energy Secretary Rick Perry instead. Here’s how the Washington Post explained it in a story last month:

President Trump repeatedly involved Vice President Pence in efforts to exert pressure on the leader of Ukraine at a time when the president was using other channels to solicit information that he hoped would be damaging to a Democratic rival, current and former U.S. officials said.

Trump instructed Pence not to attend the inauguration of Ukrainian President Volodymyr Zelensky in May—an event White House officials had pushed to put on the vice president’s calendar—when Ukraine’s new leader was seeking recognition and support from Washington, the officials said.

Pence’s staff was weighing whether the vice president should lead a delegation to attend Zelensky’s inauguration in May, an important vote of confidence for the new Ukrainian president whose nation has come to view the United States as a bulwark against Russian aggression. Russia has annexed Crimea, a part of Ukraine, and continues to foment a separatist conflict in eastern Ukraine.

The date of the inauguration had been in flux, the White House still had not dispatched advance staff and Secret Service to Ukraine, and no visit had been officially confirmed when the president instructed Pence not to attend, according to officials. A current and former official confirmed Trump’s instructions, which were also mentioned in the whistleblower report.

After the transcript’s release this morning, House Intelligence Committee chair Adam Schiff addressed Trump directly during the hearing. “I hope you will explain to the country today why it was—after this call and while the vice president was making plans to attend the inauguration—that you instructed the vice president not to attend Zelensky’s inauguration,” said Schiff.

During the April call, Trump invited Zelensky to visit the White House, an invitation the Ukrainian eagerly accepted. The transcript of that conversation contains no indication of Trump demanding the investigations he asked for in the July call with Zelensky. But text messages between Kurt Volker, then the US special representative for Ukraine negotiations, and Andrey Yermak, a key adviser to Zelensky—released by House investigators in early October—demonstrate that there was a clear understanding between the two countries: A date for a White House meeting between the two leaders would be set only after Zelensky convinced Trump that he would launch the investigations.

Here’s the rough transcript of the April 21 call: