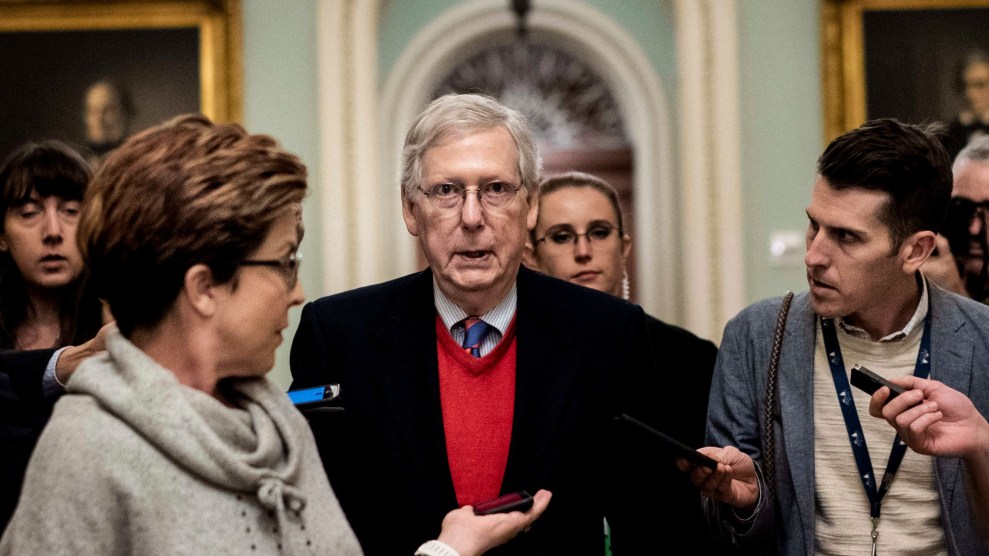 Senate Majority Leader Mitch McConnell (R-Ky.) on Tuesday rejected Democrats’ request to subpoena several key witnesses as part an eventual impeachment trial, calling it a “strange request at this juncture” in a speech on the Senate floor Tuesday.

McConnell was responding to a letter sent by his Democratic counterpart, Chuck Schumer (N.Y.), on Sunday that demanded the Senate seek testimony from four White House officials who did not participate in the House impeachment inquiry, including Mick Mulvaney and John Bolton, and proposed a format for the impeachment trial that closely follows the rules that governed Bill Clinton’s Senate trial in 1999. “In the trial of President Clinton, the House Managers were permitted to call witnesses, and it is clear that the Senate should hear testimony of witnesses in this trial as well,” Schumer wrote. At President Trump’s direction, Mulvaney refused to comply with a House subpoena. Bolton said he would only testify if a judge ordered him to do so.

That proposal made exactly zero headway with McConnell, who has said previously that he favors a speedier impeachment trial, as opposed to Clinton’s five-week trial. Instead of approving witnesses before the trial formally kicks off, McConnell said it would “presumably” fall to House prosecutors to make that request once a trial is underway—though Republicans, who hold a majority in the Senate, could vote to block any such efforts.

McConnell's full remarks on the Senate floor are more complicated than the bits flying around Twitter.

He's not ruling out witnesses, but says the Senate should make the decision on them after opening statements, as they did in 1999.https://t.co/83FFisBTi5

Even after leaving open the possibility that some witnesses could be called later on, McConnell took a few more digs at the House’s case for impeachment. “The fact that my colleague is already desperate to sign up the Senate for new fact-finding…suggests something to me,” McConnell said of Schumer. “It suggests that even Democrats who do not like this president are beginning to realize how dramatically insufficient the House’s rushed process has been.”