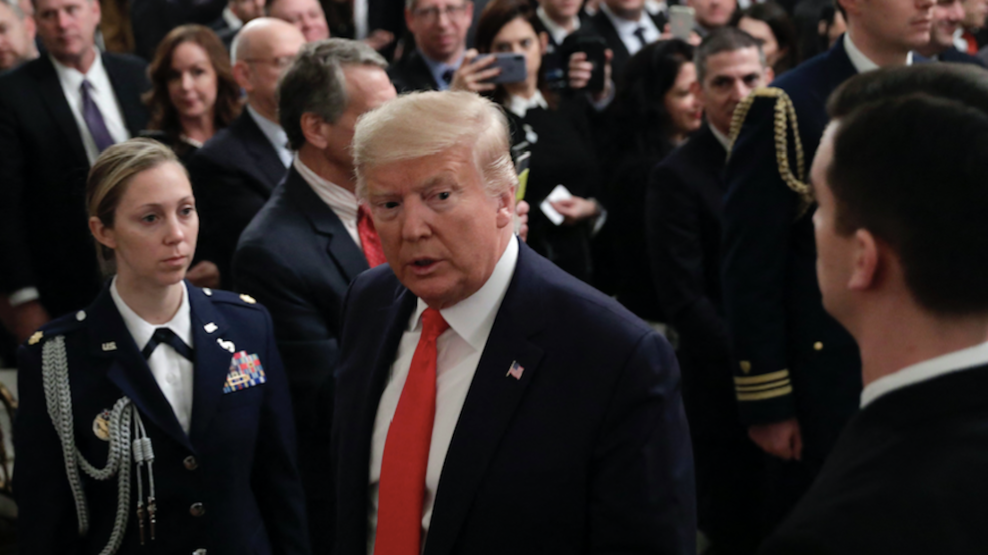 Halfway into his remarks at the White House unveiling the administration’s long-awaited Middle East peace plan, President Donald Trump on Tuesday found a moment to lavish praise on Secretary of State Mike Pompeo, who in recent days has been accused of bullying a female NPR reporter.

“That’s impressive Mike,” Trump said. “That reporter couldn’t have done too good a job on you.” He then paused before adding the punchline, “I think you did a good job on her, actually.”

The remarks delighted audience members, some of whom seemed both shocked and thrilled by the jab at NPR reporter and All Things Considered host Mary Louise Kelly. Last Friday, Kelly revealed that Pompeo had recently berated her with expletives after she asked about his role in the Ukraine scandal at the center of impeachment. The conflict extended into the weekend when on Saturday, Pompeo, in turn, accused her of blindsiding him in the interview, adding a snarky comment suggesting that Kelly, who received a master’s degree in European history from Cambridge, was unable to identify Ukraine on a map. Pompeo’s claim of having been lied to about the substance of the interview, however, quickly fell apart when emails between Kelly and the State Department acknowledging that questions on Ukraine had been agreed to were made public.

Trump, looking visibly pleased with himself, quickly returned to his teleprompter remarks on Tuesday. But the jarring moment appeared to reveal the general approach of Pompeo’s State Department, where officials have remained silent over its decision to bar NPR’s diplomatic correspondent from an upcoming overseas trip with Pompeo. It also emphatically telegraphed the president’s approval of Pompeo’s treatment of both the media and women, two groups that Trump has openly and frequently disdained.

Trump praises Pompeo after he bullied an NPR reporter and then prohibited another NPR reporter from traveling with him: "That reporter couldn't have done too good a job on you … I think you did a good job on her actually." pic.twitter.com/FsUfCkXi6D