THE CAR TAX….The LA Times chimes in this morning to suggest that if Arnold Schwarzenegger wants to raise revenue, he should think about reimposing the old vehicle license fee, which he cut when he took office, rather than raising sales taxes:

The car tax is a smarter choice than a sales tax for digging out of the current budget hole. Asking Californians to pitch in through their vehicle registration fees rather than at the cash register would have fewer negative effects on sales, which we can expect to be diminished too much already in the coming months.

Sales taxes are regressive: They take a higher percentage of household income from the poor than from the rich. A 1999 California Policy Research Center study found vehicle license fees to be nearly as regressive, but at least the proceeds are unrestricted and could be used to bail the state out of its mess. Because of voter fiat, sales taxes paid at the gas pump are off limits for any use but transportation. Local government also claims a share. Another advantage of car taxes: They are deductible from federal income tax. Try deducting your sales tax on your 1040 form and see how far you get.

I’ll add another couple of related points. First, the California sales tax is already high, and local add-ons make it even higher. 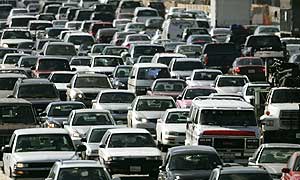 Schwarzenegger’s proposal would hike it above 10% in most places, and most of the tax literature I’ve read suggests that 10% is an upper bound for an effective sales tax. Above that it has serious effects on sales revenue, promotes out-of-state purchasing, and produces compliance problems.

Second, sales taxes are regressive by nature and there’s only a limited amount you can do about it (exempting food purchases is the most common approach to adding a bit of progressivity). Not so with the vehicle license fee. Right now the VLF is a flat rate on the assessed value of a vehicle, which is based on its purchase price and a fixed schedule of depreciation (basically 10% per year). It’s true that if all you did was raise the VLF to its old rate of 2% it would remain about as regressive as a sales tax (see Table 5 here), but that’s not the only way you can do it. Unlike a sales tax, which needs to be a flat rate for administrative reasons, the VLF could easily vary by assessed value. It could stay at its current rate of 0.65% up to, say, $10,000 in assessed value, increase to 2% for more expensive cars, and increase still further to 4% for top end cars. The average rate would still be about 2%, but the incidence of the tax would be more progressive.

And finally, here’s one more great reason for increasing the VLF. It’s a truism that if you tax something, you get less of it. So ask yourself: which could California use less of? General consumption? Or cars? The question answers itself, doesn’t it?