OOGEDY-BOOGEDY….Kathleen Parker blames the demise of the Republican Party on its “evangelical, right-wing, oogedy-boogedy branch,” and Jonah Goldberg is annoyed:

What aspects of the Christian Right amount to oogedy-boogedyism? I take oogedy-boogedy to be a perjorative reference to absurd superstition and irrational nonsense. So where has the GOP embraced to its detriment oogedy-boogedyism? With the possible exception of some variants of creationism (which is hardly a major issue at the national level in the GOP, as much as some on the left and a few on the right try to make it one), 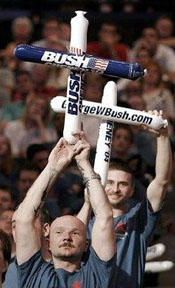 I’m at a loss as to what Kathleen is referring to. Opposition to abortion? Opposition to gay marriage? Euthanasia? Support for prayer in school?

OK, maybe “oogedy-boogedy” wasn’t the most felicitous phrase to use. Sway to the music all you want and no one will mind. But I think conservatives do themselves a disservice if they pretend not to know what Parker is talking about.

Now, the GOP didn’t lose all those votes solely because of their embrace of cultural victimhood. It was a Democratic year, after all, and the economy worked against them too. Still, exit polls suggest they had already lost most of this ground by 2006, and the economy had nothing to do with it back then. Conservative gains after 9/11 may have masked the problem for a while, but fundamentally these are voters who saw the Republican Party turn into a party of rabid identity politics and turned away in disgust. It’s probably cost them (so far) about 10 million votes, and in an era where 53-47 is considered a big victory, that’s a helluva deficit to make up elsewhere.

A party that merely wants to move more slowly and more deliberately than liberals in the cultural sphere wouldn’t have lost all those votes. But the real-life GOP, a party whose primary association in much of the public mind is with revulsion toward gays, immigrants, urban elites, and the non-churchgoing, did. That’s oogedy-boogedy.