BARACK OBAMA 2.0….Barack Obama is apparently planning to create a permanent political organization designed not just to help him win reelection in 2012, but to help him get his policy agenda passed in the meantime:

The organization, known internally as “Barack Obama 2.0,” is being designed to sustain a grass-roots network of millions that was mobilized last year to elect Obama and now is widely considered the country’s most potent political machine.Organizers and even Republicans say the scope of this permanent campaign structure is unprecedented for a president.

….Though the plan still is emerging, one source with knowledge of the internal discussion said the organization could have an annual budget of $75 million in privately raised funds. Another said it would deploy hundreds of paid staff members — possibly one for every congressional district in certain politically important states and even more in larger battlegrounds such as Florida, Ohio, Colorado, Virginia and North Carolina. 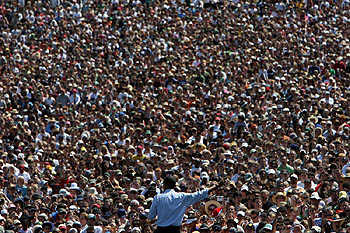 ….The Obama system will be used at least in part to influence members of the president’s own party. For example, Democratic lawmakers in Republican-leaning districts might resist voting for an Obama-backed global warming bill. In that case, the White House or DNC could use the new network for phone campaigns, demonstrations or lobbying trips to push lawmakers to stick with Obama.

This is something that Mark Kleiman more or less predicted many months ago. (To me, anyway. I’m not sure if he blogged about it.) His conjecture was that Obama’s organization had fundamentally redefined presidential politics thanks to its huge pool of dedicated volunteers and its ability to quickly raise unheard-of sums of money. After all, what congressman is likely to buck the boss if the boss can offer — or withhold — hundreds of thousands of dollars without batting an eye and mobilize — or withhold — hundreds of thousands of phone calls and telegrams depending on how closely you toe the presidential line? Every president has a certain amount of power he can bring to bear against holdout legislators, but Obama’s organization brings this to a whole new level.

If this turns out to be right, Congress is going to learn pretty quickly that the ballgame has changed. Should be fun to watch.