BUSH’S MISTAKES….Noam Scheiber points to an interesting passage from President Bush’s press conference yesterday. The subject is whether he made any mistakes in office:

I believe that running the Social Security idea right after the ’04 elections was a mistake. I should have argued for immigration reform. And the reason why is, is that — you know, one of the lessons I learned as governor of Texas, by the way, is legislative branches tend to be risk-adverse. In other words, sometimes legislatures have the tendency to ask, why should I take on a hard task when a crisis is not imminent? And the crisis was not imminent for Social Security as far as many members of Congress was concerned.

As an aside, one thing I proved is that you can actually campaign on the issue and get elected. In other words, I don’t believe talking about Social Security is the third rail of American politics. I, matter of fact, think that in the future, not talking about how you intend to fix Social Security is going to be the third rail of American politics.

This is sort of fascinating on a few different levels. First: that Bush somehow thinks immigration reform would have been less contentious than Social Security. In what universe? 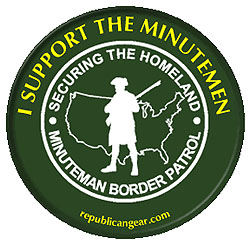 He may not read blogs, but surely he and Karl Rove were at least dimly aware of what Rush Limbaugh and the dittoheads all thought about this? Is he really this out of touch with the base of his own party? Or does he just not want to admit to himself what that base is really motivated by?

Second: that he thinks he campaigned on the issue of Social Security reform. But in fact he barely mentioned it. One of the very reasons his proposal flopped (though certainly not the biggest reason) is that it came out of the blue. He spent most of the 2004 campaign talking about national security and tax cuts and whatnot, and then as soon as he won he suddenly announced that a massive Social Security overhaul was at the top of his agenda. If he had campaigned on it, he either would have learned quickly what a loser his privatization plan was or else ginned up some support for it. But he didn’t.

Third: Bush is still a political animal. His motivation for immigration reform was to lure Hispanics into the GOP fold, as he had successfully done in Texas, and his failure to do that still resonates with him as one of his biggest mistakes. He continues to find it hard to fess up to any kind of real policy errors (cf. Katrina during the same press conference), but he’s far more open to taking blame for failures in electoral strategy, which is sort of the game-playing side of being president and head of the party. In the end, apart from his tireless infatuation with being a “war president,” I think that’s always been the part of the job that animated him more than any other.