INVADE THE CAYMANS!….In our current issue David Cay Johnston has a great piece about all the tax loopholes we ought to close as we tackle the long-term reengineering of our fiscal system. Here’s my favorite:

The Obama administration could tell the Caymans — now fifth in the world in bank deposits — to repeal its bank secrecy laws or be invaded; 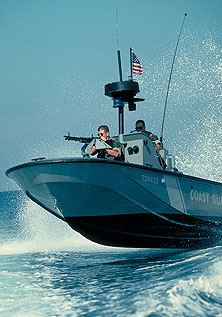 since the island nation’s total armed forces consists of about 300 police officers, it shouldn’t be hard for technicians and auditors, accompanied by a few Marines, to fly in and seize all the records. Bermuda, which relies on the Royal Navy for its military, could be next, and so on. Long before we get to Switzerland and Luxembourg, their governments should have gotten the message.

Barring gunboat diplomacy (tempting as it is), there is no reason we cannot pass laws to block financial transactions with tax havens or even, Cuba-style, make it a crime for Americans to visit or do business with them without special permission. Congress could declare the hiding of funds a threat to national security and require that anyone with offshore assets disclose them to the IRS within 30 days and pay taxes, interest, and penalties within 180 days. For the holdouts, temporary special teams in the IRS and Justice Department could speedily pursue civil or criminal charges.

Boo yah! Other (slightly less bloodthirsty) suggestions include rules preventing companies from keeping two sets of books; increasing top marginal rates on the super-rich; reining in abuse of tax deferrals; ending utility scams (a new one to me); ditching the home mortgage deduction (good luck with that); bringing back usury laws; ending the burglar alarm subsidy (seriously); and a whole slew of others. A great read.