TARP SAVES BANK OF AMERICA….Bank of America received $20 billion in new capital from the Treasury today, along with $118 billion in asset guarantees. Why? Because after buying Merrill Lynch in September they discovered that Merrill’s losses were a wee bit higher than expected. And when did they finally figure this out?

Bank of America said it learned of Merrill’s losses after the Dec. 5 shareholder vote. And in the days following, both Federal Reserve Chairman Ben Bernanke and Mr. Paulson impressed upon [CEO Ken] Lewis 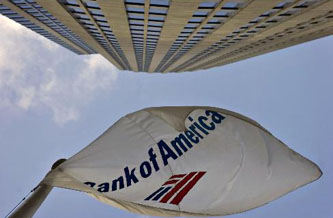 the importance of closing the transaction for the firm’s own sake and also warned of the consequences for the country’s overall financial system, say people familiar with the discussions.

Bank of America spokesman James Mahoney said: “Beginning in the second week of December, and progressively over the remainder of the month, market conditions deteriorated substantially relative to market conditions prior to the Dec. 5 shareholder meetings. So Merrill wound up making adjustments for the quarter that were far greater than anticipated at the beginning of the month. These losses were driven by mark-to-market adjustments which were necessitated by changes in the credit markets, and those conditions change on a daily basis.”

….By Dec. 17, Mr. Lewis went to Washington to discuss what he had already disclosed to Mr. Bernanke in an earlier phone call — that his bank was having trouble digesting Merrill’s losses. Mr. Lewis described the losses as monstrous, according to a person familiar with the matter.

At that 6 p.m. meeting, Mr. Bernanke and Mr. Paulson both told Mr. Lewis that failing to complete the Merrill acquisition would be disastrous. The policy makers said abandoning the deal would further destabilize markets, and would hurt the bank, potentially setting off a ripple effect that would exacerbate a fragile situation.

Something here really doesn’t add up. What happened in the final three weeks of December that could have caused such a massive change in Merrill’s position? Those weeks were actually fairly quiet on the toxic waste front.

Not saying it couldn’t happen, but there must be more to this story. Or, alternatively, it’s just your standard Wall Street fuckup. I guess that’s probably it.

POSTSCRIPT: By the way, does anyone else remember that fawning piece about Ken Lewis and Bank of America that 60 Minutes aired last October? I wonder if Lesley Stahl feels embarrassed yet?