This is from American Express, which has now decided to hunker down and simply lie about their habit of doing this. 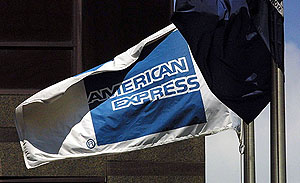 Compare and contrast the following news accounts. When Kevin Johnson returned from his honeymoon last year he got a letter from Amex saying, “Other customers who have used their card at establishments where you recently shopped have a poor repayment history with American Express.” Here’s what they told the Atlanta Journal Constitution about this in December:

“We’re just doing this to manage risk,” said Lisa A. Gonzalez, an American Express spokeswoman. She declined to say which retailers or mortgage companies are associated with consumers with higher default rates. She said it makes sense to examine these factors because “customers who have loans outstanding with certain lenders or customers who make transactions with certain merchants tend to have a higher proportion of credit issues or a higher probability of default.”

And here’s what they told the New York Times this week:

“The letters were wrong to imply we were looking at specific merchants,” said Susan Korchak, a company spokeswoman….Now, the company says that there never was such a list. So what about the language in its letters to cardholders, which calls out particular “establishments” where cardholders had shopped, I asked. Well, apparently that was all just a big misunderstanding, despite the number of people who must have been in on drafting the notes in the first place.

So: a month ago monitoring your transactions with “certain merchants” was a legitimate way of managing risk. This month the story is that they were never doing it in the first place. You betcha.