WITHDRAWING FROM IRAQ….General Ray Odierno, the top field commander in Iraq, thinks we can reduce forces there by no more than two brigades over the next six months. 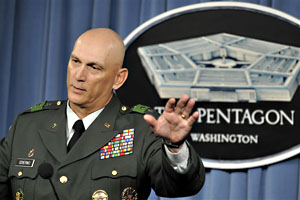 Then we need to wait until 2010 before making any further decisions: “I believe that if we can get through the next year peacefully, with incidents about what they are today or better, I think we’re getting close to enduring stability, which enables us to really reduce,” he said. Marc Lynch isn’t impressed:

The politics of this aside, I think that Odierno’s intention of keeping troops in Iraq through the national elections is dangerously wrong. The CFR/Brookings/Odierno “go slow” approach ignores the reality of the new Status of Forces Agreement and the impending referendum this summer — which may well fail if there is no sign of departing American troops.

….This strategy is also a recipe for endless delay….Senior Iraqi officials have suggested that the national elections, which Odierno suggests as the point when drawdowns might begin, may well not be held until March 2010. I don’t think that 16 months is a sacred number. But what Odierno is proposing is no significant drawdowns for 14 months, followed by another period of wrangling. This could ironically make the “rush for the exits” that everyone wants to avoid more rather than less likely — whether or not it leads to the failure of the SOFA referendum.

There’s always something a year down the road that we should wait for before pulling troops out. Provincial elections. Stability. SOFA. National elections. You name it. But at some point we need to demonstrate to the Iraqis that we’re really pulling out and they need to take the transition seriously. It’s well past time for that.

Obama also has a lot of credibility at stake over this. He said during the campaign that he wanted to withdraw within 16 months, and while there’s a lot of room to fudge there, he still needs to show that he’s serious about that. It may end up being 24 months instead of 16, and the residual force he leaves behind may end up comprising tens of thousands of troops, but he still needs to start. He needs to show the world that his word is good.