GOP LEMMING WATCH….You think DC Republicans are nuts?  Come to California for the real thing.  We’re in a $41 billion hole, and after weeks of grinding negotiations Gov. Schwarzenegger and Democratic leaders finally agreed on a package that contained $15 billion in spending cuts, $15 billion in temporary tax increases, and $11 billion in new borrowing.  So what happened? 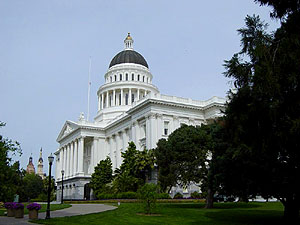 Nothing.  The package needs a grand total of three (3) GOP votes in the state Senate, and it turns out there are only two.  All the others are still dead set on allowing California to run off a cliff rather than vote for any tax increases whatsoever no matter what the circumstances.  (Sen. Tony Strickland, R-Moorpark: The package, if passed would be remembered as “the Valentine’s massacre on California taxpayers.”)  In the Assembly, my representative, Chuck DeVore, tried to lead a revolt against the sellout Republican leadership, failed, and then promptly resigned his position as minority whip.  (Brian Leubitz at Calitics: “In the Byzantine world of Yacht Party politics this of course is good
news for his chances of winning the party’s nomination to get pummeled by Barbara Boxer in 2010.”)  The Assembly then went into lockdown overnight.  (John Myers via Twitter: “A lockdown really is a lockdown. Assembly sergeants are at all exits of the chambers.“)  The Senate pulled an all-nighter too, but by dawn the third GOP vote was still nowhere to be found.  Senate Dems even slashed some spending for children’s healthcare, a project always near and dear to moderate Republicans, but it wasn’t enough to get Sen. Dave Cox on board.  So they’re still a vote shy.

Anyway, no big point to make here except that Republicans in California are certifiably insane.  Unfortunately, they’re also pretty much invulnerable.  Over the past decade their ranks have dwindled to about a third of the legislature, but thanks to the cozy gerrymandering deals of the recent past they represent districts that are far more likely to punish them for compromise than for constructive engagement.  And since California requires a two-thirds majority to pass a budget, they can stamp their feet, hold their breath, give rousing speeches to their neanderthal constituencies, and run the state off a cliff just for giggles.  Aren’t you glad you don’t live here?