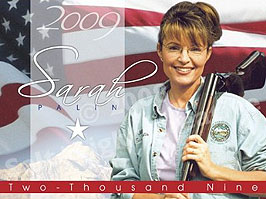 Sarah Palin is the crack cocaine of political celebrities.  I want to ignore her, but I just can’t.  And you can’t either.  Admit it. Michael Leahy of the Washington Post serves up the latest embarrassment:

A couple of weeks before the Alaska legislature began this year’s session, a bipartisan group of state senators on a retreat a few hours from here invited Gov. Sarah Palin to join them. Accompanied by a retinue of advisers, she took a seat at one end of a conference table and listened passively as Gary Stevens, the president of the Alaska Senate, a former college history professor and a low-key Republican with a reputation for congeniality, expressed delight at her presence.

Would the governor, a smiling Stevens asked, like to share some of her plans and proposals for the coming legislative session?

Palin looked around the room and paused, according to several senators present. “I feel like you guys are always trying to put me on the spot,” she said finally, as the room became silent.

Never forget: this is the person who John McCain thought was qualified to be a heartbeat away from the presidency.