All of us have things we believe in even though we don’t really have any evidence for them.  One of mine has to do with the causal direction of depression and sleep problems.  The conventional wisdom says that depression causes you to sleep badly, but I’ve long thought it was more likely the other way around: 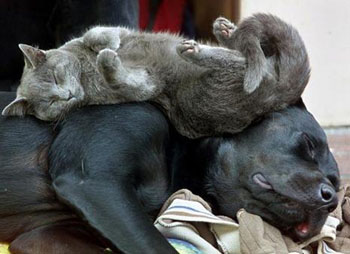 poor sleep makes you depressed.  So I’m happy to report that Science™ has finally caught up with my uninformed prejudices:

Doctors studying psychiatric disorders noticed long ago that erratic sleep was somehow connected. Adults with depression, for instance, are five times as likely as the average person to have difficulty breathing when asleep, while between a quarter and a half of children with attention-deficit hyperactivity disorder (ADHD) suffer from sleep complaints, compared with just 7 per cent of other children.

Until recently, however, the assumption that poor sleep was a symptom rather than a cause of mental illness was so strong that nobody questioned it. “It was just so easy to say about a patient, well, he’s depressed or schizophrenic, of course he’s not sleeping well – and never to ask whether there could be a causal relationship the other way,” says Robert Stickgold, a sleep researcher at Harvard University. Even when studies did seem to point in the other direction, the findings were largely overlooked, he says.

….So how does poor sleep lead to behavioural and psychological problems? Some of the links are apparent. For example, every parent knows that tired children usually become hyperactive rather than sleepy. Sleep disruption also bumps up stress hormone levels, which could contribute to daytime anxiety, a component of many psychiatric disorders. More intriguingly, it now seems sleep disruption can fundamentally interfere with the brain’s ability to process emotion and to react to an emotional stimulus in an appropriate way.

I used to look forward to sleep.  It was relaxing; it was pleasant; it would make me feel better about the world.  But it’s been a long time since that was so.  Now it’s just something I do when I get tired every night, with no prospect that I’ll feel anything other than tired and grumpy when I wake up in the morning and then stay that way pretty much all day.  Unfortunately, there doesn’t seem to be anything wrong enough with my sleep that it’s obvious on a routine sleep test.  I found out years ago that I have mild sleep apnea, but it’s pretty mild and the fix is a C-PAP machine, which I tried but was never able to tolerate for an entire night.  So no help there.

But now, science is on the case!  Hooray!  Maybe they’ll finally start taking this stuff seriously.  Maybe.  (Via Andrew Sullivan.)