The introduction to the contract says that one of its aims is to “recognize the uncertainty that the unrealized market-valuation losses in AIG-FP’s super-senior credit derivative and originally-rated AAA cash CDO portfolios have created for AIG-FP’s employees and consultants.” 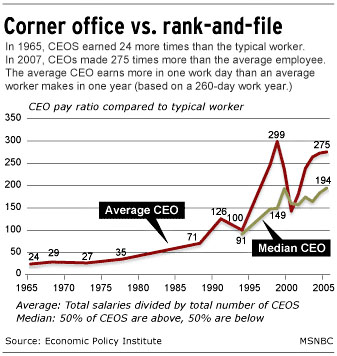 That certainly suggests that AIG-FP was aware that there might be significant losses, as does the fact that they got their compensation locked down in a way that made it independent of their profits or losses.

Of course they got their comp locked down when they saw the storm ahead of them.  This is what executives always do.  Back during the dotcom bubble, corporations handed out trainloads of cheap stock options even though the practice was heavily criticized.  Why?  Because the stock market was going up and it was a nearly guaranteed way to make lots of money.  After the bust, they suddenly took the criticisms to heart and largely stopped the practice.  Why?  Because the stock market was going down and it wasn’t easy money anymore.

Likewise, in the financial industry, pay has long been heavily linked to performance.  Why?  Because the industry was going gangbusters and it guaranteed everyone a big payday.  Now, though, banks are all talking about increasing base pay and cutting back on bonuses.  Why?  If you think it’s because they’ve finally taken public criticisms about short-term incentives to heart, I have a bridge right here in my backyard with your name on it.

What happened at AIGFP is standard practice throughout corporate America.  America’s corporate titans like to talk endlessly about performance-based pay and how capitalism rewards risk, but in real life compensation packages are almost always constructed to avoid as much risk as possible.  If you work in a growing industry, your bonus depends on raw growth rates.  If you work in a declining industry, your bonus is linked to relative growth rates.  If the market is up, your bonus is paid in stock.  If it’s not, suddenly deferred comp and increased pension contributions are the order of the day.  Heads you win, tails you win.

The AIG traders who got this sweetheart deal are nothing special.  Management probably didn’t even think twice about it.  Of course you switch from performance bonuses to retention bonuses when the market looks stormy.  What else would you do?

I don’t, frankly, care all that much about the AIG bonuses being slashed.  The only reason AIG isn’t in Chapter 11 is technical (they’re too big to fail!), so morally I don’t see any reason not to treat them as if they were in Chapter 11 like any other failed company.  That means employees stand in line for their bonuses along with all the other creditors.  On the other hand, this whole thing really is small potatoes in the grand scheme of things, and Tim Geithner and the United States Congress have better things to worry about.

But the culture that brought this on?  That deserves to be dismantled brick by brick.  I may not care much about AIG, but if it’s the spark that finally gets Americans to take the executive comensation racket seriously, then hallelujah.  If it’s not, then it’s just a carnival sideshow.