That’s an exciting headline, isn’t it?  But it’s important.  One of the key bits of financial deregulation over the past three decades has been the dismantling of capital controls, allowing vast tidal waves of money to flow between borders without hindrance.  In general, this has been a plus: nobody in Britain wants to go back to the days of sleeping on continental friends’ couches because they weren’t allowed to take more than 50 pounds out of the country. 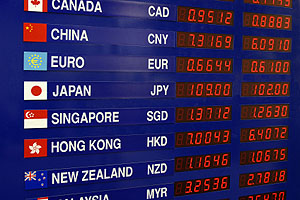 On the other hand, the Asian currency crises of the late 90s were largely due to unsustainable amounts of unregulated foreign capital suddenly flowing into the region (and then just as suddenly stopping), and the current banking crisis in the U.S. is at least partly due to an overreaction to the Asian crisis.  For the past decade all that Asian money has been flowing into the U.S. instead, and a tsunami of cheap money was one of the factors that caused the credit and housing bubble of the past few years.  Megan McArdle examines her free trade beliefs on this score:

[This suggests] that global capital flows may be way more problematic than I have historically been willing to credit.  I don’t want to blame all bubbles on foreign money.  But foreign money has two unpleasant characteristics:  there is so much of it that it can relatively easily swamp a nation’s productive capacity, and it is relatively uninformed about the local market.

I’m not sure where that leaves me.  The capital controls of the mid-twentieth century were even worse, especially for emerging markets, where they became both focal points for, and sources of, massive corruption.  And one of the reasons America today is such a massively successful economy is that foreign money funded our industrialization.  Bubbles may simply be an inescapable side effect.  But perhaps it’s time to rethink a commitment to global capital liberalization.

I’m not sure where it leaves me, either, especially since this has been an active subject of conversation for a decade already and hasn’t produced anything even close to a consensus.  But this does seem like the kind of topic that lends itself to my “sand in the gears” theory: we don’t need to reinstate capital controls, we just need to slow down the flow of global capital ever so slightly.  Even a tiny tax on foreign capital flows could have a significant impact.  Ideas welcome on this score.