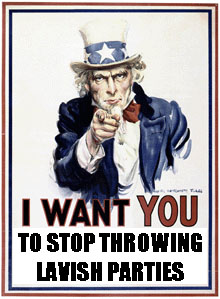 The New York Times reports that banks are getting tired of Uncle Sam constantly looking over their shoulders:

Financial institutions that are getting government bailout funds have been told to put off evictions and modify mortgages for distressed homeowners. They must let shareholders vote on executive pay packages. They must slash dividends, cancel employee training and morale-building exercises, and withdraw job offers to foreign citizens….The conditions are necessary to prevent Wall Street executives from paying lavish bonuses and buying corporate jets, some experts say, but others say the conditions go beyond protecting taxpayers and border on social engineering.

Some bankers say the conditions have become so onerous that they want to return the bailout money. The list includes small banks like the TCF Financial Corporation of Wayzata, Minn., and Iberia Bank of Lafayette, La., as well as giants like Goldman Sachs and Wells Fargo.

Obviously, everyone’s first reaction is here is to break out their tiny violins so we can all play sad songs for the nation’s bankers.  Songs like this: If you don’t want taxpayer oversight, then don’t take taxpayer money after you’ve run your bank into the ground.  Until then, suck it up.

That’s pretty much my second reaction too.  Still, there’s a germ of an issue here.  One of the arguments against bank nationalization is that unlike Sweden, where those nice sensible Scandinavians were willing to let their technocrats run things after their housing bust, Americans have no such discipline.  Nationalize a big American bank and Congress will promptly use it as a piggy bank for every half-baked scheme their staffs can cook up.  I mean, it’s not as if Congress was exactly a positive influence on Fannie Mae and Freddie Mac, was it?

Which suggests these complaints deserve a hearing.  Some things just make sense: if you’re accepting bailout money because your capital has become dangerously low, then it’s hardly unreasonable to demand that you stop depleting capital even more by continuing to pay out full dividends.  That’s directly related to the problem at hand and it’s a reasonable regulatory response to a serious problem.

On the other end of the spectrum, though, you get populist grandstanding like the recent fuss over Northern Trust hosting a bunch of client parties at a golf tournament they were sponsoring in Los Angeles.  Aside from the fact that money for the events all came out of the bank’s marketing budget — which no one in their right mind thinks should be shut down during a recession — they almost certainly would have wasted more money by calling off their parties than by holding them.  Those kinds of things are scheduled far in advance, and the contracts they signed probably didn’t allow them to recover more than a pittance if they cancelled at the last minute.  So if they had cancelled, they would have ended up paying out 90% of their budget and getting nothing for it, instead of paying out 100% and getting something in return.

Now, you can argue that they should have cancelled anyway purely for the PR value.  And maybe so.  And it’s obviously a judgment call about what kinds of rules should apply to bailed out banks that ought to be conserving cash.  Still, those of us who tentatively favor nationalization should also favor a process that keeps Congress at arm’s length.  The whole point of nationalization is to restore both solvency and confidence, and let’s face it: sober management isn’t really Congress’s stock in trade.  I’m not quite sure where the balance lies, but it’s worth an open discussion.