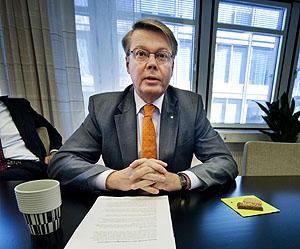 The interview of the day is Benjamin Sarlin’s short chat with Bo Lundgren, the finance minister who oversaw Sweden’s temporary bank nationalizations in the early 90s:

“There are similarities [to Sweden’s case],” Lundgren said. “There are three things any plan must do — the first is to maintain liquidity, that’s taken care of by the Fed. The second thing is to restore confidence, and that hasn’t been done so far and obviously the first proposal to buy toxic assets wasn’t enough. And then you need capital injections so banks can keep lending at the levels needed for the economy as a whole.”

However, Lundgren said that Obama was correct in observing that a similar nationalization scheme might be more difficult given America’s size and preeminent role in world finance compared to Sweden.

“With Japan and Sweden, the crises we had, even if it was a very long process with Japan, they were crises that we had on our own,” Lundgren said. “The rest of the world economy managed to be not perfectly good but still reasonably good. This time it’s worse; it’s a kind of financial tsunami.”

I suppose you could equally make the case that the worldwide nature of this crisis makes dramatic action like bank nationalization more necessary than it was in Sweden’s case.  Still, Lundgren is almost certainly right that it would be a lot more difficult.  Nationalizing a $2 trillion institution that’s a commercial bank, an investment bank, a hedge fund, an insurance company, a brokerage, and owner of a portfolio of other banks around the world is a lot trickier than nationalizing a midsize regional bank in the era before the explosion of credit derivatives.

In fact, here’s an assignment desk job for someone with the background to know the details: What would it take to nationalize an outfit like Citigroup?  What are the likely legal, financial, diplomatic, and operational issues that would have to be resolved?  It would be a real public service if someone with a credible background in this stuff could lay out the details in a way that’s understandable for all the rest of us.