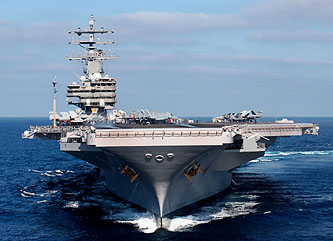 The New Republic asked a few defense experts who won and who lost in the Pentagon procurement reshuffling announced yesterday.  Here’s one answer:

POSITION: President of the Center for Strategic and Budgetary Assessments

WHO WON: The Navy, which “essentially emerges unscathed. I talked to Gates this morning. According to him, they’ll get to keep their eleven carriers through 2040, and [the budget] left the proposed increase in submarine production intact.”

WHO LOST: The Air Force, because of the slashed F-22 program. “You look across the board, and you say, ‘The Air Force had a pretty tough day.'” Also, the Army, which was “already in a state of disrepair after the cancellations of the Crusader Artillery System and Comanche helicopter” over the past decade. Under the new budget plan, the Army will see huge cutbacks to FCS (Future Combat Systems), which is “the crown jewel of the Army’s modernization program.”

The Navy’s reduction from 11 carriers to 10 won’t happen until 2040?  Since their only other “loss” was the DDG-1000 destroyer, which they wanted to cancel anyway, I guess they really did come through this whole thing pretty unscathed.  The other services must be pretty hosed off about this.