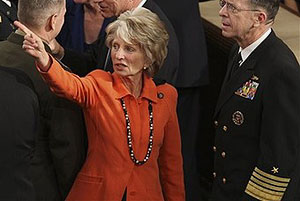 I spoke too soon.  Sorry Atrios!  The real quote of the day comes from Jane Harman (D–Calif.), caught on tape during an NSA wiretap:

You just know that any conversation that ends this way can’t be good.  Here’s the backstory from CQ:

Rep. Jane Harman , the California Democrat with a longtime involvement in intelligence issues, was overheard on an NSA wiretap telling a suspected Israeli agent that she would lobby the Justice Department to reduce espionage-related charges against two officials of the American Israeli Public Affairs Committee, the most powerful pro-Israel organization in Washington.

Harman was recorded saying she would “waddle into” the AIPAC case “if you think it’ll make a difference,” according to two former senior national security officials familiar with the NSA transcript.

In exchange for Harman’s help, the sources said, the suspected Israeli agent pledged to help lobby Nancy Pelosi , D-Calif., then-House minority leader, to appoint Harman chair of the Intelligence Committee after the 2006 elections, which the Democrats were heavily favored to win.

Harman vigorously denies that anything of the sort happened.  Conversely, CQ reports that not only does the conversation exist, but that then-Attorney General Alberto Gonzales stopped the probe of Harman because he wanted her support for the NSA wiretapping program, which was under fire at the time.

Juicy!  So I wonder who leaked this?