This seems pretty misguided to me. In particular, DHE needs to think harder about the fact that there are already well-resourced conservative think tanks with plenty of capabilities. Before CAP came on the scene, there really wasn’t a “Heritage of the left.” On the right, 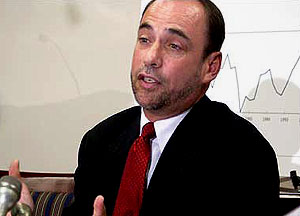 Heritage and AEI already exist. The problem they face is that the conservative movement, as presently constituted, is not prepared to accept anything other than “tax cuts” as a solution to anything. Consequently, they’re not really even prepared to accept the premise that other problems exist. Tax cuts can’t solve climate change, so there must be no such thing! Tax cuts can’t curb inequality, so there must not be a problem with growing inequality.

But there’s another way to look at this.  After all, a decade ago conservatives would have said that liberals already had think tanks too: Brookings, the Ford Foundation, CFR, etc.  The problem is that they were the wrong kind of think tank: they may have leaned toward the left institutionally, but they weren’t overtly partisan.  They weren’t dedicated to a cause.

So liberals decided they needed more direct competitors to Heritage and AEI, and CAP was one of the results.  Likewise, although Holtz-Eakin may say his proposed think tank is CAP for the right, my guess is that it’s really more a DLC for the right.  That’s what the conservative movement needs, after all.  They have plenty of partisan, conservative think tanks at their disposal, but they’ve ossified so much that they’re now as much a part of the problem as the Republican Party’s special interest base itself.  What they need is a think tank that tries to move the party back toward the sane center, one that produces ideas beyond bashing gay rights, extolling endless tax cuts, pretending that global warming doesn’t exist, and cheerleading the death of ever more people from central Asia.  They need a conservative DLC, and I’ll bet that’s what Holtz-Eakin really has in mind.