From the Hollywood Reporter:

Executives at the Big Four broadcast networks are seething behind the scenes that President Obama has cost them about $30 million in cumulative ad revenue this year with his three primetime news conference pre-emptions. 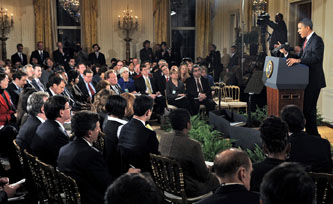 “We will continue to make our decisions on White House requests on a case-by-case basis, but the Fox decision gives us cover to reject a request if we feel that there is no urgent breaking news that is going to be discussed,” said one network exec, who, like all, would not speak for attribution fearing repercussions from the administration.

….Even more irksome, the White House is bailing out bankers, insurers and carmakers, but nary a nickel has gone to the struggling media industry.

I’m actually on the networks’ side here: it’s really not clear to me why they should be obligated to blanket the airwaves with presidential press conferences these days.  Something like 90% of all households now get cable or satellite reception, which means they can watch this stuff on CNN or CSPAN regardless of what the nets do.  And very little news is made at these things.

So why not rotate?  Let cable cover prime time press conferences as part of their normal fare, and let the Big Four take turns.  The days are long gone when we could expect the entire nation to stop what it was doing and listen raptly whenever the president decides to take a few questions from the press corps.

At the same time, if the nets really are irked about not getting any bailout money — well, break out the tiny violins.  You know what to do with them.