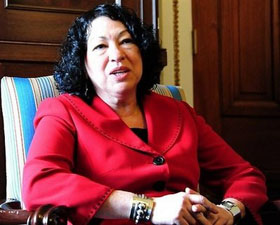 Does Sonia Sotomayor have a temperament problem?  Ann Friedman directs us to an NPR piece by Nina Totenberg today:

Judge Guido Calabresi, former Yale Law School dean and Sotomayor’s mentor, now says that when Sotomayor first joined the Court of Appeals, he began hearing rumors that she was overly aggressive, and he started keeping track, comparing the substance and tone of her questions with those of his male colleagues and his own questions.

“And I must say I found no difference at all. So I concluded that all that was going on was that there were some male lawyers who couldn’t stand being questioned toughly by a woman,” Calabresi says. “It was sexism in its most obvious form.”

And what if such criticism came from a woman lawyer? Well, says Calabresi, women can be just as sexist as men in their expectations of how a woman judge should act.

NPR played a couple of snippets of Sotomayor in its piece so listeners could judge for themselves.  Ann did: “Listening to the clips, Sotomayor sounds an awful lot like John Roberts — who did not face any concerns about his ‘fiery temperament’ during his confirmation hearings. Totenberg exposes this talking point for what it is: straight-up sexism, with some racism mixed in for good measure.”