Matt Yglesias points out today that socialistic single-payer healthcare is actually quite popular in the United States.  It’s called Medicare.  The chart below, from a Mark Blumenthal column last month, shows that Medicare users are far more satisfied with their healthcare than users of private insurance.  So why is it so hard to persuade Americans to simply expand the program?  Blumenthal explains:

The higher scores for Medicare are based on perceptions of better access to care. More than two thirds (70 percent) of traditional 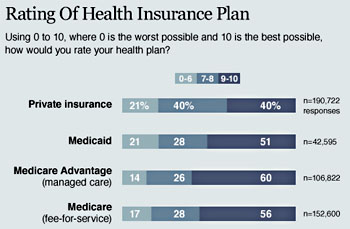 Medicare enrollees say they “always” get access to needed care (appointments with specialists or other necessary tests and treatment), compared with 63 percent in Medicare managed care plans and only 51 percent of those with private insurance.

….If the Medicare experience is so positive, why are people so easily talked out of expanding on it? First, younger Americans not enrolled in Medicare do not share the enthusiasm of seniors for the program. Six years ago, the Kaiser Foundation asked a national sample of adults to rate the Medicare program. Medicare was hugely popular among those aged 65 or greater….Those under 65, however, had very different views. Only 45 percent rated Medicare favorably. Only 36 percent considered it well run, as compared to 47 percent who said the same about private health plans. While 73 percent of those over 65 said Medicare allowed patients to choose any doctor, only 28 percent of those under 65 agreed.

There’s a pretty obvious political dynamic that’s responsible for this.  Seniors, who actually use Medicare, know perfectly well that it’s a good program.  They can see any doctor they want, they get care when they need it, and the quality of service is high.  So why do younger Americans have such a negative attitude toward Medicare?

Answer: because conservative politicians have been bellowing for years about what a terrible program it is.  And since younger workers don’t actually use it themselves, the bellowing works.  They figure it must suck.

In reality, Medicare works fine.  Not perfectly, but fine.  It offers service at least as good as private insurance despite serving the highest-risk population there is, and it does at least as good a job of reining in costs — slightly better, in fact.  Sure, it could be improved, but it’s already probably better than the employer insurance that you have right now.  I’d switch in a second if I could.

But I can’t, and neither can you.  And nothing like it will be offered to you anytime soon.  After all, if you actually used it, you’d probably like it.  Which is exactly what conservative politicians are afraid of.