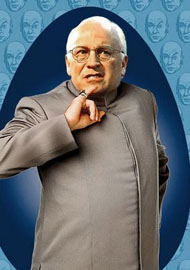 Conor Friedersdorf has three reasons he doesn’t think he’ll be able to support any of the progressive healthcare reforms currently on tap.  Here’s #2:

It shouldn’t be too difficult to imagine another Dick Cheney or Richard Nixon in the White House. Are we really comfortable assuming that the state will never use its role in health care to pressure political opponents, or collect frightening kinds of data, or politicize medical decisions more than is now the case? Isn’t there any size and scope of government that progressives deem to be too big on prudential grounds? Why doesn’t this put us there?

Points for originality here: I don’t think I’ve ever heard this objection before.  And around here we like new and different.  Still, while I bow to no man in my contempt for either the Trickster or the Dickster, even I can’t really see either one of them scheming to deny Ralph Nader a liver transplant or something.  But then again, maybe my imagination isn’t active enough.

I keep seeing the argument that America is the leading health care innovator, and that if our system looks more like what Europe has, there won’t be anyone left making strides in research and development. I haven’t seen a convincing rebuttal, though there may well be one. Links?

This is actually the only objection to national healthcare that I find sort of interesting.  But here’s the problem: the reason it’s hard to find a convincing rebuttal is because the argument itself is purely speculative in the first place.  Sure, it’s possible that the only thing keeping medical innovation alive is the (approximately) one-fourth of global healthcare spending accounted for by the quasi-private portion of the American market.  But that’s all it is: possible.  There’s no real empirical argument at work here, and given the current state of the global healthcare market, there probably can’t be.  That makes it pretty hard to construct an empirical rebuttal.

So I guess I’d reframe this.  Instead of simply suggesting that innovation will die if America adopts national healthcare, how about breaking that down into three or four very specific arguments about what kind of innovations we’re talking about and why they’d be destroyed if the feds funded 80% of American healthcare instead of the current 45%?  Let’s hear some details and some proposed mechanisms.  Then maybe we can take a crack at having a discussion about it.