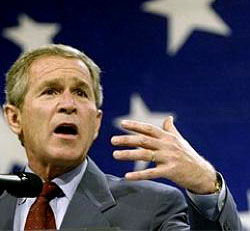 I may regret posting this, but here’s an account of how George Bush tried to talk French president Jacques Chirac into supporting the invasion of Iraq:

Chirac recounts that the American leader appealed to their “common faith” (Christianity) and told him: “Gog and Magog are at work in the Middle East…. The biblical prophecies are being fulfilled…. This confrontation is willed by God, who wants to use this conflict to erase his people’s enemies before a New Age begins.”

This bizarre episode occurred while the White House was assembling its “coalition of the willing” to unleash the Iraq invasion. Chirac says he was boggled by Bush’s call and “wondered how someone could be so superficial and fanatical in their beliefs.”

After the 2003 call, the puzzled French leader didn’t comply with Bush’s request. Instead, his staff asked Thomas Romer, a theologian at the University of Lausanne, to analyze the weird appeal.

….In 2007, Dr. Romer recounted Bush’s strange behavior in Lausanne University’s review, Allez Savoir….Subsequently, ex-President Chirac confirmed the nutty event in a long interview with French journalist Jean-Claude Maurice, who tells the tale in his new book, Si Vous le Répétez, Je Démentirai (If You Repeat it, I Will Deny), released in March by the publisher Plon.

This isn’t brand new: the Toronto Star wrote about it a couple of months ago, though it’s gotten very little attention since.  In any case, consider it your weirdness of the day.  Not that we’ve exactly been lacking for that lately…..