Aside from constructing a remarkably baroque but (I hope!) properly positioned shelf for my computer mouse — all in an effort to reduce the increasing pain in virtually every joint in my right arm — I also read 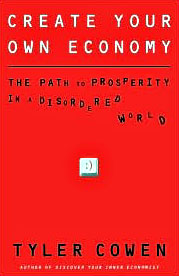 Tyler Cowen’s Create Your Own Economy this weekend.  I don’t really trust myself to blog an overall reaction to it, so instead I offer up this excerpt for discussion.  It’s a comparison of traditional culture, in which the artist produces a sustained, integrated performance of some kind, to modern culture, which we increasingly create ourselves by stitching together bits and pieces:

Today we don’t usually receive comedy, tragedy, and the sublime all in ready-to-consume, prepackaged form.  As I’ve stated, we’re more interested in this idea of assembling the bits ourselves.  For all its virtues, it takes well over three hours to hear Don Giovanni straight through, perhaps four hours with intermission.  Plus the libretto is in Italian.  And if you want to see it live, a good ticket can cost hundreds of dollars plus travel costs.

So we instead pick up cultural moods and inputs we want from disparate sources and bring them together through self-assembly.  We take a joke from YouTube, a terrifying scene from a Japanese slasher movie, a melody from a three-minute iTunes purchase, and the sublime from our memories of last year’s visit to the Grand Canyon, perhaps augmented through a photograph.  The result is a rich and varied stream of inner experience.

Tyler’s contention is that the “mental ordering” involved in collecting lots of cultural bits and then obsessively organizing them can be every bit as gratifying and inspiring as consuming a play by Shakespeare or a novel by Faulkner (or a Broadway show or a genre romance novel).  But this strikes me as a chimera: it’s like comparing your own amateur piano playing with taking in a performance by Glenn Gould.  They’re both worthwhile activities, and the former can illuminate the latter, but that doesn’t mean you get the same thing out of them.  That’s because Gould is a genius and you’re not.  There’s more to art than whether it lights up your brain’s pleasure centers.

It’s unfair to offer just this short excerpt without more of Tyler’s surrounding argument, but one way or another an awful lot of the book hinges on the idea expressed here: namely that obsessive mental ordering of cultural bits is increasingly providing a substitute for the enjoyment of traditional, long-form art created by others.  He might be right that this is happening, but I’m double plus unconvinced that it’s as positive a development as he suggests.  Opinions?