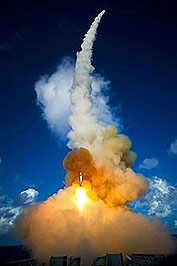 The White House will shelve Bush administration plans to build a missile-defense system in Poland and the Czech Republic, according to people familiar with the matter, a move likely to cheer Moscow and roil the security debate in Europe.

….The Obama administration’s assessment concludes that U.S. allies in Europe, including members of the North Atlantic Treaty Organization, face a more immediate threat from Iran’s short- and medium-range missiles and will order a shift towards the development of regional missile defenses for the Continent, according to people familiar with the matter. Such systems would be far less controversial.

Will this buy us some goodwill from Russia?  Will it send the Bill Kristol wing of the conservative movement into Munich/striped pants/appeasement hysterics?  I’d say maybe to the first but definitely yes to the second, which all by itself probably makes it worth doing.