A few days ago, after a month of low-level sniping, Glenn Beck declared full-on war against Van Jones, an environmental activist who had been appointed an advisor on green jobs to the White House Council on Environmental Quality.  Why? 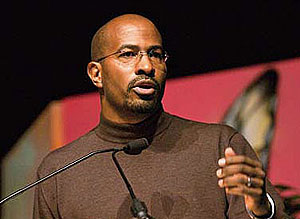 Well, Jones had been fairly radical in the early 90s, which was probably enough, but it’s more likely that the real reason had to do with a recent boycott of Beck’s show spearheaded by ColorOfChange.com, a group that Jones co-founded in 2005.  Jones left the group a couple of years ago, but no matter: Beck wanted revenge and Jones was an easy target.

I don’t have the stomach to repeat all the smears that have been leveled at Jones, so you’ll have to google it if you haven’t been keeping up with this.  And none of it would have mattered much if (a) a YouTube of Jones calling Republicans “assholes” hadn’t gone viral and (b) he hadn’t signed a petition in 2004 from 911Truth.org asking for an investigation into charges that the “current administration may indeed have deliberately allowed 9/11 to happen.”

But it did, and he did, and tonight Jones resigned.  “I cannot in good conscience ask my colleagues to expend precious time and energy defending or explaining my past,” he said. “We need all hands on deck, fighting for the future.”

So now Beck has his scalp and our effort to generate green jobs during a recession will be just a little less effective.  Lovely.