Advocates of health care reform are relying on budget manipulations to stick with President Obama’s pledge to overhaul the system without adding to the deficit, critics on and off Capitol Hill say.

Both independent budget analysts and Republicans say a Senate vote expected this week on a 10-year, nearly $250 billion Medicare reimbursement bill is the perfect example. 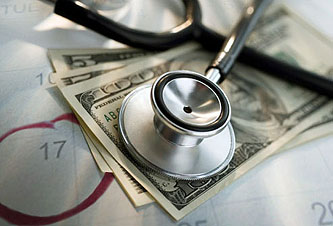 They say it was sliced out of the reform plans because it would send the cost of Mr. Obama’s top legislative priority over $1 trillion.

I assume this is all over Fox and talkradioland as well.  It’s really shameless.  What Obama and congressional Democrats are doing is ending some budget trickery that’s been going on for years: the annual barnyard dance in which scheduled reductions in Medicare reimbursements to doctors are put on hold.  We could keep doing this on a “temporary” basis every single year forever, of course, but what’s the point?  Why not just ditch the charade and put the money back in the budget where it belongs?  It won’t cost any more or less than doing it annually, but it’s more honest.  Jon Chait:

So why is Obama getting attacked so bitterly over this? Because he’s acknowledging it. It’s the same thing that’s happened to fiscal policy since he took office. The Bush administration hid the true fiscal picture with a plethora of accounting gimmicks — keeping all war costs out of the budget, pretending the middle-class tax cuts would expire, and on and on. Obama has tried to make the budget reflect reality. Alas, reality is a bummer. (And yes, the long-term deficit is entirely the fault of policies Obama inherited.) So Obama gets attacked for a “shell game” when all he’s really doing is admitting the shell game that’s been going on for years.

Political opportunism is the main force behind conservative complaints here, and that’s fine.  Politics ain’t beanbag etc.  But what’s really driving conservatives mad is the fact that Obama is tacitly showing them up.  They’re supposed to be the fiscal tightwads who watch every dollar and don’t play games with the budget, but for the past eight years they’ve been doing almost nothing but playing games.  Now Obama is doing the responsible thing and ending it, so they’re doing the same thing as any kid whose hand gets caught in the cookie jar: yelling and screaming and insisting that it’s everybody else who’s really at fault.  It’s not a pretty sight.

Anyway, as Chait says, this has nothing to do with healthcare reform and there’s no reason it should be part of the healthcare bill.  Democrats are right about that.  The only way in which it really is related is that this is basically the bribe being paid to doctors to support Obamacare.  Unfortunately for conservatives, they can’t really complain too loudly about that because they’ve been paying the bribe for years themselves.  Nobody wants to piss off doctors, after all.